I Can See Clearly Now

When the spring ice melt started running down the inside of my kitchen walls, I actually laughed.  I always hated the faux wood paneling in the dinette area of the kitchen and could not afford to replace it.  Now it would have to be torn out, and the homeowner’s insurance would cover the cost!

But first, we would need to replace the front and back downstairs windows.  The house was built in 1942, and these were the original windows – both windows had begun to leak, sometimes severely enough to damage the walls underneath them. 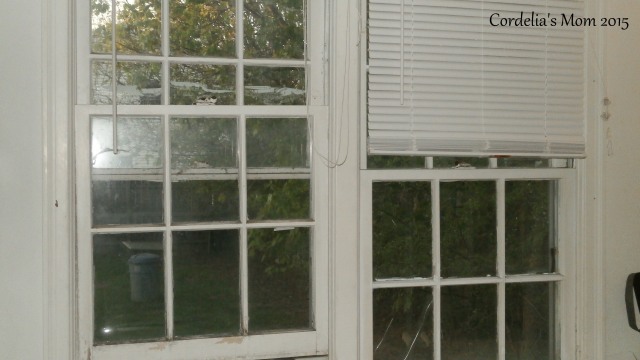 However, money was a problem.  Obviously, I could not use the insurance money for the windows because they were not part of the claim.  I had X amount of dollars available from savings, and these were large windows.  Economy windows were not an option inasmuch as we may want to sell the house within the next few years, and that front picture window is the first thing you see as you approach the house.

I pretty much failed Economics 101 in my life, so when the salesman suggested financing, I chuckled. Banks haven’t been very happy with me since my 2011 bankruptcy.  But, financing would allow me to purchase both windows, as well as a new bathroom window, and they would all be good quality.  So, I filled out an application – and it went through!

To make a long story shorter, the windows were installed a couple of weeks ago.  Both hubby and I needed to take time off from work, because once the windows were removed, and the front door was wide open, someone needed to keep Cody under control.  Heaven forbid a rabbit or squirrel should run past the house during a time when she could actually get to them!

The salesman had told us the entire job would take 1 day.  I scheduled 1-1/2 days of vacation so that I could have the bathroom remodeling guy come the next morning to do his measurements (that will be another post down the blogging road – I know you’all can hardly wait).

Workers arrived on the scheduled morning, and I took Cody upstairs to watch videos with me in my room. Hubby puttered around, keeping an eye on the installation work. 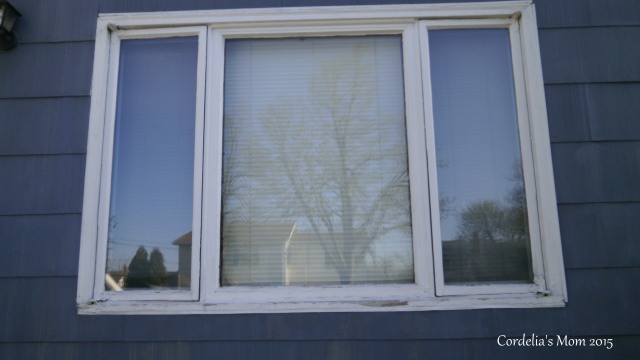 The existing windows were removed – lots of banging, breaking glass, etc.  Cody was good – she just looked over at me and so long as I wasn’t reacting, she lay back down on her little doggie bed.

At one point, I heard one of the men ask the other, “Can’t we just put extra insulation around it?”  Then a few minutes later, my husband came up and said he overheard the head installer on the phone with his office:  “We have a 53” window here, for a 59” opening.”

Yup, they had delivered the wrong window. Wouldn’t you think they would check the size of the new windows before knocking out the old ones? But maybe that’s just me.

Fortunately, the window had not been ordered wrong – they simply had brought someone else’s.  Our window was still at the shop and would be brought to us.  Meanwhile, they worked on the other ones.

Sometime later, my husband came upstairs and asked me to come downstairs, since I was the one who would be paying for the work.  Uh-oh.  I arrived downstairs to discover both window installers standing in my driveway, along with the sales manager and the company’s business manager. Double uh-oh. 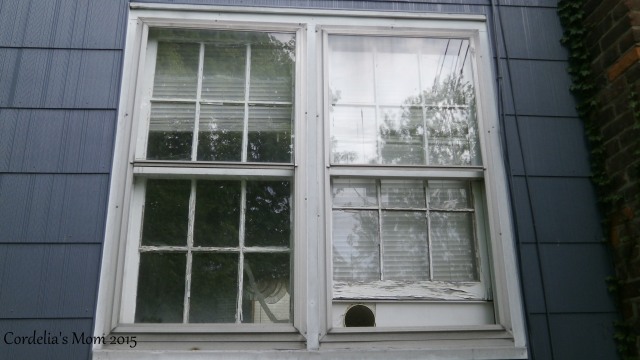 Upon removing the existing windows, it had been discovered that the frames were rotted and unusable.  We had not contracted for new frames.

Fortunately, when applying for the bathroom financing (part of future story), I had at the last minute opted to increase the loan just slightly in case any of my contractors ran over for any reason.  It was easy to write a check for the additional work required in creating new window frames, and I really didn’t want to deal with those frames on my own later.

The window installer was an artist – the frames he constructed are better than any I’ve seen elsewhere. He didn’t just slap sills on – he used top quality hardwood and then rounded them and sanded them so well that we’ve decided we’ll just use polyurethane to seal them, leaving the beauty of the natural wood.

Throughout the day, the work continued. Since the bathroom window was also being replaced, visits to the Important Room became somewhat problematic – not only were workers in there, but there were no blinds or curtains on that window.  Late in the afternoon, I realized that window was in and that the workers were outside.  Woo-hoo!  I ran into the Important Room. And there – just outside – was a worker sitting on the roof of the first-floor extension, affixing the outside aluminum to the bathroom window.  How embarrassing!  At least I hadn’t started to unrobe on my way in!

Of course, the work ran into a full second day due to the frames.  My boss wasn’t thrilled with me.

But now the windows are done – and they are gorgeous.  Next step is repairing the kitchen and living room walls, and redoing the bathroom (required because of the holes in the ceiling and the fact that the tub was so worn it couldn’t even be cleaned any more).

Our window installer was so proud of his work that he lightly affixed the frames to that our drywall guy can remove them, and we can then polyurethane them.  The window installer insists that he be called back (at no additional charge) when it’s time to put the frames back up because he wants it “done right.”  It is, after all, his work, and he doesn’t want anyone else messing it up.  He wouldn’t even accept a tip – in fact, I think we may have inadvertently insulted him by offering one. 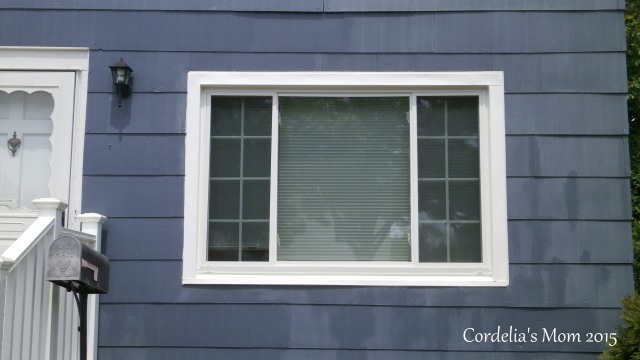 FRONT WINDOW – AFTER. We are in the process of repainting the house – that’s why it’s a little darker close to the door and splotchy on the other side. 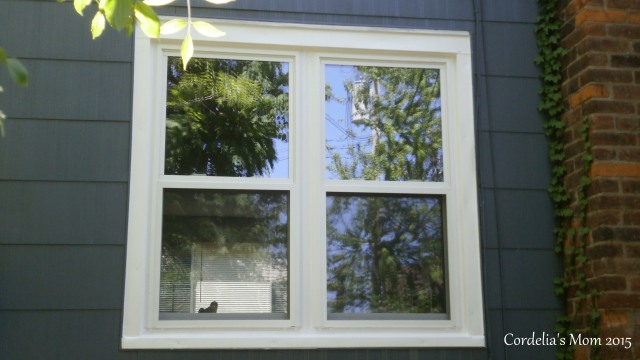 BACK WINDOW – AFTER (Are those Teddy Rosalie’s ears in the lower left corner? Not – it’s just the top of the desk chair. Made you look!)

So, Step 1 is completed. Aren’t they beautiful?  After the drywall/paintingl guy is finished, I’ll take interior pictures.  Right now, there are still holes around the windows, and the frames have not been finished.

Hopefully, all construction work will be completed around the 4th of July – I intend to bore with you with the progress of each phase – surely something to look forward to!

27 Responses to I Can See Clearly Now