Thank you, God, for sending us that horrendous winter storm, which resulted in significant damage to my home and thus pushed me past the “maybe someday soon we should update the house” line of thought into the “well, as long as we’re having the ice damage repaired, let’s do those other upgrades we need” decision.

You will recall that we started with new windows last month.  Now we began the major repair/update work:

The contractors are at the door!

1st day:  The drywall/painting contractor was late, which made me a bit nervous.  But he did apologize when he got here (assistant called off), and went right to work. Two hours later, the huge hole in the bathroom ceiling had been fixed, and you’d never know there had ever been a hole there.  Incredible work!  Now I was really excited to see what he could do with the rest of the house.

BATHROOM – before: isn’t it ugly?

In the middle of the day, I needed to use the facilities, and of course mine was occupied (there’s only one bathroom in my house).  So, I drove over to  Bon-Ton – they have a nice, clean restroom.  And while I was there, I naturally had to buy a few more of those shirts and bras that I really love and which only Bon-Ton carries.  Let’s just add that to the tally of the construction costs, shall we?

KITCHEN – before: not great, either

Day 2:  Well, we started off OK.  The drywall contractor began removing the ratty paneling in the kitchen, and I was very happy to see that the east wall under the paneling was in good shape.  But then, I noticed the drywall contractor up on a ladder inspecting the kitchen roof.  Oh, oh, that’s not good!  He had pulled off the paneling on the north wall and discovered the wall and the insulation underneath were absolutely saturated – and extremely moldy.  Which means – my new roof that was installed in 2013 has failed already. 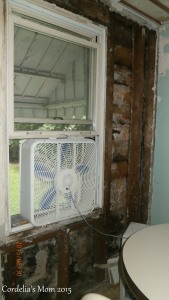 This is what we found under that paneling.

Do you have any idea how upsetting it is to see your house like this?

Humidifiers were brought in, and we all hoped the moisture was from the original ice dam and would dry up, allowing the kitchen work to continue.

Meanwhile, we tried to find the roofing contractor who installed the roof – my husband even drove over to the office address where we had originally found him – and it appears he has gone out of business.  With the impending 4th of July holiday, the chances of finding a new roofing contractor this week were slim to none. 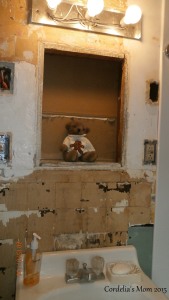 BATHROOM – during: Teddy Rosalie loves hiding in the medicine cabinet – but it’s not there, is it ?!

But at least the drywall guy was able to finish the ceiling repair in the bathroom, so the bathroom schedule wasn’t skewed.

Day 3:  The bathtub installers arrived at the same time as the drywall guy.  While the bathroom guys worked upstairs, the drywall guy did some work downstairs but couldn’t continue in the kitchen.  The kitchen wall was still saturated, indicating that the leak is an ongoing roof problem and not the result of the ice damage.  My husband and the drywall guy went up on the roof and hosed it down, and sure enough the water came right into the kitchen.  Big time bummer!  The drywall guy left for the day.

One of my long-time clients is a HUGE roofing contractor (you know, one of those mega-companies which advertises on all the local TV stations).  I’m generally uncomfortable asking any kind of favors from clients, especially those who tend to charge more than other companies.  But this was an EMERGENCY.  My client’s office manager pulled a crew off another job, and that crew was at my house within the hour.  Shingles were removed, something or other was done underneath to correct the roof pitch, and the shingles were put back on.  Problem solved.  (Although it was recommended that we might want to re-do that particular portion of the roof even though it had only been installed 2 years ago.  That’s an issue we’ll deal with another time  – if I have any money left.)

Meanwhile, the bathtub installers continued to work their magic.  At the end of the day, the bathroom walls had been repaired and the tub was in place.  One more day would be needed to do the tub surround, faucets and finish work (the wall behind the surround needed to dry overnight).  I couldn’t wait for the tub work to be done – it’s so hard to wash up in the bathroom sink!  And I refused to go to my mother-in-law’s place to shower, even though she offered.

Cody after a full day of construction

Poor Cody was totally tuckered out.  Bad enough she has to deal with Teddy Rosalie and Vlad the Vampire, but for three days, she’s had STRANGERS traipsing through the house – and couldn’t do a darn thing about it.

Tub is in! Looking better. (But now floor is gone.)

Day 4:  Bathtub and surround installed – and they are beautiful!  Should have done this years ago.

And now I have a new handyman – one of the bathtub crew moonlights, and is trying to start his own handyman service.  We have lots of little jobs we can no longer do ourselves.  Everyone needs a good handyman!

(And of course, the kids next door found it necessary to harass my contractors over the fence.  Guess Ho-Mommy is too stupid to realize a “no contact” advisory includes our contractors and visitors.  But then, she was too concerned with sunning herself in the backyard while the guys were working in the bathroom upstairs, most likely in hopes that they would watch her out the window.)

Story to be continued.  Do I have a “new” house now, or has fate been unkind?  Join me tomorrow to find out.

21 Responses to The Make-Over Begins