*sigh*  This was supposed to be my post for Thursday, April 9, 2015, but I accidentally hit “Publish” instead of “Save” (I really have to stop doing that!).  I could delete it and re-post it on Thursday, but I decided to just let it stand.  Enjoy!

Spring has sprung (more or less), and so has the house.

A question was recently asked of another blogger who lives in a snow belt:  What happens to all that snow when it melts?

Well, in my area, you get mud: 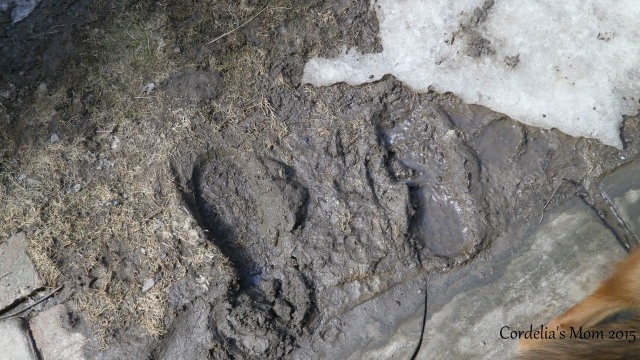 And then more mud: 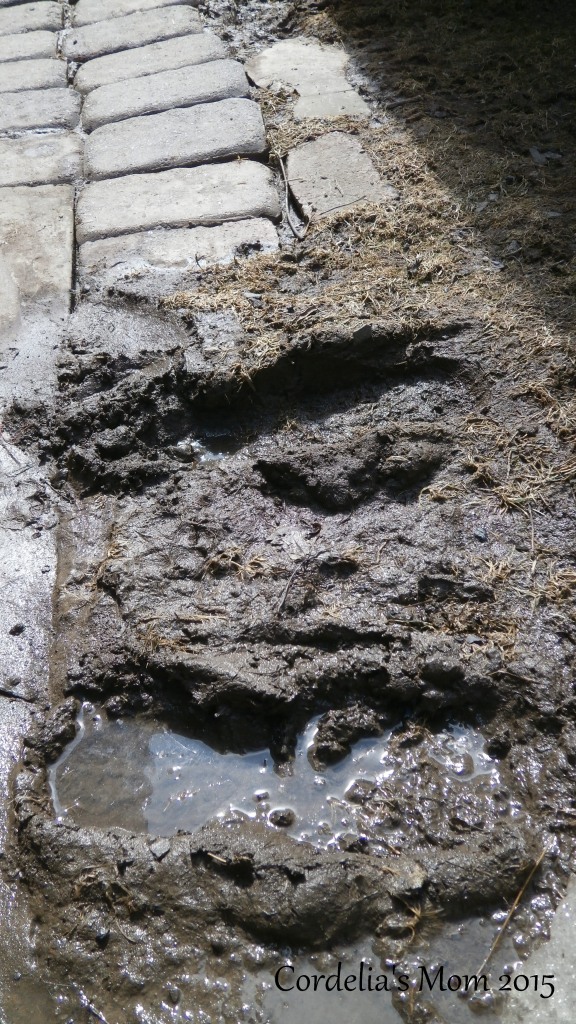 And while that’s happening, the ice on the roof of the house melts and results in this: 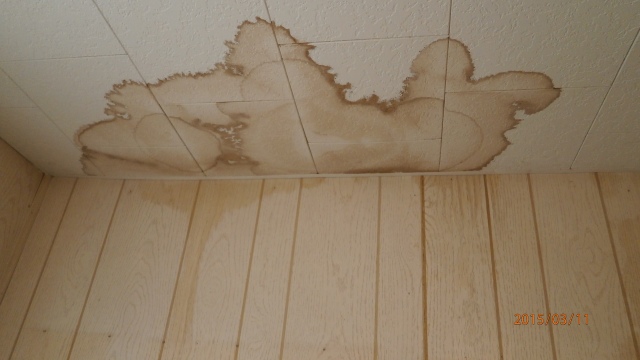 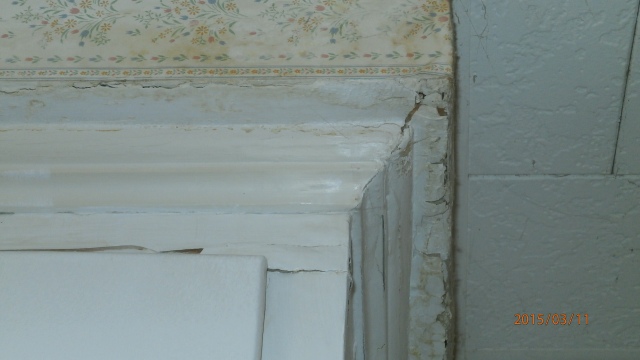 Many of you will remember that my husband and I had a new roof installed in September, 2013 – because the old roof had started leaking and we didn’t want further damage.

That winter (2013-14), we patted ourselves on the back for having the wisdom to install the roof before the first snowfall.  Never again would we have to worry about Western New York winters, at least not while we were safe and cozy inside our house.

You’d think so, wouldn’t you?

This past winter (2014-15) was an extreme event (definitely not for the faint-hearted).  Areas south of the City received up to 9 feet of snow; my northern suburb received about 3 feet.  There were periods of warming following by periods of freezing followed by more warmth and then more cold, etc.  Such freeze-and-thaw weather results in those pretty icicles that you see streaming down from the rooftops, and which become the subject of so many beautiful winter photographs.

However, it‘s not beautiful when that ice then melts, leaks above and behind the gutter and the ice shield, and finds its way into the house.  I was livid – We have a new roof, dammit! Call that damn contractor!

My house is a mid-1940’s tract house built for the use of returning World War II veterans and their families.  Every house on my street is the same basic floor plan – a two-story main building with a one-story addition on the back for the kitchen.  That one-story addition has a roof that is sloped only a degree or two above being considered flat.

I talked to two of my neighbors, who also had new roofs installed within the last 2 years.  All three of us used different contractors (all reputable), and all three of us had leaks in the exact same area of that kitchen extension.

So, it’s not the contractors’ fault – it’s Mother Nature having a little fun at our expense.

There were so many households in the Western New York area with leaky roofs this year that the local newspaper, radio and TV stations began running stories about how extreme winter affects homes and other buildings.  If nothing else, I learned that such leaks may or may not be covered by the homeowner insurance.

Fortunately for us, we had purchased the “deluxe” policy with the water back-up rider. Our agent assured us we were covered!

However, this particular insurance company had never impressed us with the way it honors (or rather, does not honor) claims.  My husband called the claims department only because I insisted – we fully expected the company to hassle us, or at the most to allow a claim of only a couple of hundred dollars.

Won’t wonders never cease?  Apparently, there are so many claims in this area that the company is bending over backward to avoid any bad publicity.  Although I had taken photographs and completely documented the damage, the adjustor didn’t even come to the house.  Based on our description, a check was sent out the very next day for the full estimated value of repairing walls, replacing ceiling tiles, and if necessary, replacing cupboards, with a notation that if the estimates come in higher, we can call for a claim review.

Now all we have to do is find someone to actually do the work. Let the fun begin!

22 Responses to House Under Water