First off, let me thank each and every one of you who actually took the time to review my Flickr.com photos!  You are all awesome!

Since I have very limited space in my small office, and I prefer not to hang anything on the walls, I had to be very careful when selecting frames.  My initial thought was to get one of those freestanding floor collage frames that holds 30 or so photos, but I couldn’t figure out where I could place it that I wouldn’t constantly trip over it.

My office contains one small corner table, a small bookcase behind my desk, and of course, the desktop itself.  So I opted for several smaller collage frames that can be placed however I discover they fit best.

I tried to incorporate your favorites, but I found a couple of older photos that aren’t on Flickr.com.  My apologies to all of you who voted for “Icicle” – I love that one, too, but decided not to include it right now.  I will change out photos from time to time; most likely, Icicle will be added at some point.  (I’m sorry I chose “Shower” for my collage as it didn’t crop right, so that will eventually be pulled.)

Note to those who liked “Follow the Leader” – I debated on that one, too, as even though it’s a bit blurry, there’s just something about it that appeals to me.  I’ll probably put that in the next collage.

Anyway, in addition to the pictures shown at the top of this post (yes, I screwed up when I took the photo and managed to get my ghost image in it, but I didn’t feel like re-taking it), I will have a separate collage for Puppy Cody and Teddy Rosalie: 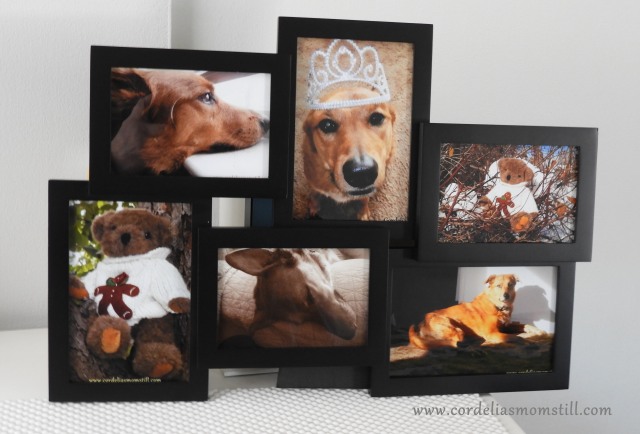 And then there will be the bookcase/desktop displays:

All in all, I think my office will look pretty cool.  If nothing else, the galleries will remind me that there is, in fact, life outside work.

Now, I need to get my butt in gear and to out there with my new camera and take some truly awesome photos.  Maybe I’ll be less lazy once the snow goes …

12 Responses to The Galleries