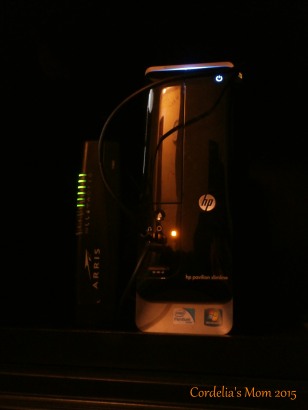 My name is CookieCakes, and I am a webaholic.

Over the last few years, my husband has often accused me of having a “soft addiction” to the internet, especially once I became a blogger.  How ridiculous is that? Blogging is a fun hobby, as is surfing the web to find ideas.  Like any hobby, it can be given up without any grief whatsoever.  Ah, but can it be given up so  easily?

My computer had been acting weird for the last few weeks, especially when accessing the internet.   I just figured it was an older computer with limited storage space.  I knew it was reaching capacity, so I bought an external hard drive and began transferring files to that.  It seemed to help.

But I was still having trouble occasionally accessing certain websites.  When the WordPress site failed to load, I just figured WP was playing games again, and I found a different way in by going to another blogger’s WP site and tracking back to my site.  That worked for awhile.

Then the unthinkable happened.  It was a Saturday, and I had just sat down to upload Victo Dolore’s guest post.  I clicked on my WP shortcut and immediately got a message that the website address could not be located.

Say what? Did I tick WP off somehow? I had just renewed my annual subscription, but maybe they were upset that I didn’t upgrade to premium? Were they incensed that I signed up for the “no advertising” option? Ok, WP, I’ll beat you at your own game like I did last time.

So I tried to go onto another blogger’s website, which I had as a favorite.  Nothing.

Hmmm.  WP must really be pissed.  What on earth could I have done?

I tried Yahoo, Google and AOL. Nothing.

Now realized it wasn’t WP at all. It was the ENTIRE INTERNET! Nooooo.

I checked all the connections between the computer, the modem, the keyboard, the wall.  Everything looked A-OK.

My husband heard me swearing and came downstairs to tell  me that he had the same issues with his laptop, and that a few nights before he had solved the problem simply by shaking the modem.  I tried that.  Nothing.

The modem lights were on, but nothing was happening.  Time to call Time Warner.

Have you ever tried to call your internet provider? On a Saturday? Good luck with that.

I dialed the number on the Time Warner invoice and got a recorded message to the effect that there were service issues in my area, which were being resolved.  I decided to wait it out.

Several hours later, I tried the internet again. Nothing.  Time Warner has lied in the past, so I decided to go the next step.   The last time I had internet problems, I was able to resolve them online with Time Warner – but how could I do that today when the internet wasn’t connecting?

A light bulb went off in my little brain – I now have that LG table that I bought from Sprint! And it works on the Sprint network as well as wifi! Yippee!

So, I dragged that baby out and powered it up.  Bear in mind that I had never really used it and was totally unfamiliar with its operation.  But it was time to learn.  I got onto the Sprint network, accessed the internet, and managed to get to the Time Warner website, which thankfully has a Live Chat function.

The tech verified that there were no outages in my area (told ya, didn’t I?)  The tech told me to check the connections (already did so) and reboot the modem (already did that three times).  According to their system, everything looked OK:  the modem was communicating with them just fine, but for some reason it just wouldn’t talk to my computer.  The tech was very polite and determined to help me.

But then the tablet crashed.  I had thought it was fully charged, but apparently not. 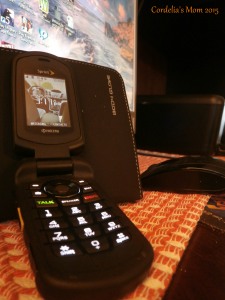 Now I had no computer access and no tablet. *sigh* Have to use the PHONE again.  So, I dialed and got the exact same recorded message (hello, your own rep told me there are no outages, liar!).  I chose a different option and got a recorded message telling me to check the connections, reboot the modem … at which point I screamed something like, “Dammit I already did all that!”  It was a voice-activated system, and the immediate response was a very polite, “Ok, let me connect you to a customer service representative.”

I had to explain the Live Chat I had just gone through so the new tech could assist me.  We got to a point where the new tech asked me to check the serial number on the back of the modem, and I couldn’t find one.  When I again picked up the phone, the call had been TERMINATED.

The third time I called Time Warner, I’m afraid I wasn’t particular polite, especially since I had to go through the same two recorded messages I’d already heard the last two times.  Finally, I got a tech who reviewed the other two techs’ notes, checked the system, and determined that it was an internal problem in the modem itself.  The modem was almost 10 years old, and modems only have a life expectancy of 3-5 years.  A service call was arranged for installation of a new modem, and yes, they could do it on Sunday afternoon.

The serviceman who came Sunday was a little chatty, but very pleasant and definitely knew what he was doing.  He got a little excited when he saw the existing modem – “Wow, I’ve heard about these but never actually saw one!  And you still have the original box?  Awesome!”

A new modem was installed (and in a better location than the last one), and the serviceman sat down to wait for the verification codes and updates from their system.  And wait …. And wait …  It was late in the day and he really needed to get home, but he would stay and make sure everything was working properly.  I had the privilege of listening to his conversation via speakerphone with the tech guy in the main office – “Well, gee, it should be working.  The codes are right.  It says it should be working.”

Turned out the new modem was defective (see how my luck runs?).  Thank heavens, the serviceman had another one on the truck, and it only took a few minutes to switch them out.  And, the Good Lord be praised, all the lights started flashing in the correct order and suddenly, the computer, the laptop, and the tablet (which had been recharged overnight) all had internet access!

And I learned that two days without internet access are not something I care to go through again.  For two days, I had no idea what was going on in the world – I don’t get a newspaper (had just cancelled it the week before), and I don’t watch TV.  Without internet, I am totally lost.

Is that addiction? Or is it a sign of technological advancement?

42 Responses to Addicts Are Us

figuring out life one hobby at a time

Book reviews and other news from nowhere in particular

An Archive of Curious Facts for the Curious