Even Good Dogs Are Bad Sometimes (Or, Why Dogs Can Be Expensive)

Looks cute, doesn’t she? Now that she’s grown up, I can pretty much trust Puppy Cody anywhere in the house.

Most of the time, that is.

There’s a reason that we leave NOTHING out on counters or table tops at a level that can be reached by a 44-lb mixed breed dog.

Recently, I was taking my shower upstairs, while hubby and Cody were downstairs, supposedly watching each other. Suddenly, I heard the pitter-patter of running paws and stomping of manly feet, accompanied by “No, Cody, put that down!”

Who would think that a dog could totally destroy a “contractor’s” heavy-duty phone? But Cody did it very well:

YEP, THAT PHONE WAS INDESTRUCTIBLE

That phone was only a few days old, and I bought it because it was supposedly indestructible (the salesman indicated that it could be dropped from a 12-story building without breaking – but the salesman had never met Cody).

Thus, another Sunday spent running to the nearest retail store to replace an item I could not do without. Since it was, in my opinion, hubby’s fault for not watching the dog, I made him pay for the replacement (“grumble, grumble, oh ok”). Fortunately, the store was not busy that day, and I had time to chat with the store clerk. I casually mentioned that while I would love to have the features of a smart phone, I did not want a phone that large, nor one that did not fold up. As everyone can see, my phones take a lot of abuse (sometimes they survive, sometime not – that’s life). 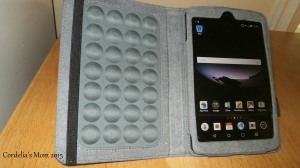 As it turned out, Sprint was running a special offer – a “free” Spark tablet with each new phone purchase. I could have the larger screen and features of a smart phone when I wanted them, but still be able to carry the smaller basic phone in my pocket for everyday use. Even I’m not naïve enough to believe anything is “free” – but for $15 a month, it seemed like a really good deal. The tablet can connect either to the Sprint network or to wi-fi (to avoid Sprint data charges wherever free wi-fi is available). How could I resist? I even bought a special padded case for those times when I will inevitably drop the darn thing.

Now, I can see what my blog looks like on those smaller screens (still one of the best looking blogs around, isn’t it?), and when I get bored at a real estate closing, I can surf the net like everyone else is doing. I can even use the tablet as a digital book reader if I can figure out how to download stuff to it.

Cordelia’s Mom has advanced one more step into the world of technology.

Now, I just have to be sure to keep that tablet away from the dog.

41 Responses to Even Good Dogs Are Bad Sometimes (Or, Why Dogs Can Be Expensive)