What the FRAP was THAT?

Puppy Cody’s dog license renewal came in the mail the other day.  Wow, it’s been a year already?

You all will remember when I found my puppy at the SPCA and brought her home.  You will recall how her name was determined.

But what you don’t know is what it was like during Puppy Cody’s first year (well, maybe you do [sort of] if you’ve ever raised a puppy yourself.)

Raising a new puppy is not for the faint-hearted.  Nor is it for those who are meek, short of patience, or fanatic about cleaning.  Trust me.

I’ve raised a number of dogs over the years.  But not one of them has been as difficult as Cody [she’s full-grown now, so I guess I should drop the “Puppy”].   Even the border collie mix and the German Shepherd were easier.    Many times I wondered whatever possessed me to go to the SPCA that day anyway? 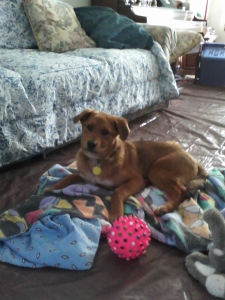 Yes, that’s a tarp – but she still managed to eat the carpet.

The first few days, Cody was an absolute angel – stayed right by my side, played quietly on her new blanket/bed, never did her business in the house.  In fact, the first day she didn’t do any business at all for nearly 36 hours – I actually found myself calling the vet to see if that was normal, or did I bring home a defective dog.  I also did extensive internet research to see if anyone else ever had this problem with a new puppy.  All sources said, basically, just be patient and let nature take its course – once the pup feels comfortable in her new surroundings (and once she just can’t hold it anymore), things will normalize.

It was the dead of winter.  Cody would only pee or poop on top of the highest snow drift on the side of the house, and took her own sweet time.  Since I had to keep her on leash for the first few months, I froze my ass off.

Inside, Cody began to explore her surroundings and discovered:  socks, shoes, books, the wooden bookshelf,  the edges of the carpeting, the chair cushions, the nice chewy couch skirt, and anything else that wasn’t hidden, nailed down, or taken completely out of the house.  Yes, she ate part of the couch – the carpeting –  the walls.  I found myself buying any kind of chew toy or chew treat I could find, just to give her something appropriate to sink her tiny growing teeth into.

Like all new puppies, Cody needed to exercise and stretch those tiny legs, and it wasn’t easy the first few months when she hadn’t yet been vaccinated and could not be taken on walks.

“FRAPs most often happen in the early morning and early evening. Racing around the house, rolling on the rugs and careening off the furniture are all normal parts of the canine FRAP. When you can, sit back and enjoy the brief show.”

(excerpt courtesy of Pedigree: “Dealing With Your Dog’s Energy Bursts”)

I vaguely recall Morgan and Riggsie experiencing FRAPs. But Cody took them to a whole new level.   Every evening, usually sometime between 7pm to 8pm, she would suddenly explode into absolutely insane activity – running full speed from one end of the house to the other, up and down the stairs, snarling and growling. She would launch herself from the middle of the living room floor and hit the wall three-quarters of the way up to the ceiling – usually flying past my head as I sat on the couch waiting for the period to end. Many times I thought that snarling Tasmanian devil would take a chunk out of my face, but somehow she always pulled back at the last possible second.

All the books, however, said that puppy aggression must be controlled – the owner must become alpha. So, when the FRAPs seemed to be turning into one of her “I am going to eat you” episodes, I would often catch her in mid-air and put her onto her blanket/bed at my feet. This went on for several weeks, until one day I not only put her onto her bed, I also put myself on top of her and just stayed there until she calmed down. After that, she seemed to consider my attitude BEFORE she began the bad behavior, and it was never quite as bad. Although it didn’t stop completely until she matured a little more.

I will say this, though: No matter how bad Cody was behaving, once I had enough for the evening and decided to go to bed, she immediately calmed herself and lay down on the floor next to me. It always amazed me that she could turn herself around that quickly. Never once did she cause trouble once lights were out, and she always lay quietly until I got up in the morning. Even on weekends, when I like to sleep in a bit, she would patiently await my entry back into the world of the living. Maybe that’s why I ultimately decided she was worth the effort – a bad dog wouldn’t adjust so willingly to her owner’s schedule.

Then there was the house-training issue. Like most new owners, we used the crate method. That method had worked well with all our previous dogs.

Cody absolutely hated that crate, no matter how enticing I would make it. I would put nice, soft bedding in, special toys, a treat or two. Sometimes she would go in voluntarily in the evening and sniff around, until she discovered the edges of that nice soft bedding. I don’t know how many crate pads and blankets I had to replace before she accepted the crate as her domain.

We developed a routine whereby I would throw a treat into the crate when it was time for me to leave for work. Cody would happily follow the treat in, and I would close the crate door and leave the house without further fuss. Then Cody would suddenly realize her owner was gone, and the crying would start. It could be heard halfway down the block. It broke my heart. But like any new baby, Cody had to learn to calm herself. I tried to make it easier by returning home at lunch time to give her some time out of the crate, but putting her back in became a battle.

It didn’t help that Cody seemed to have problems learning to do her business outside. After her initial angelic period, she discovered well-scrubbed (I thought) spots in the house where the previous dogs had accidents as they aged – and Cody began do her business on the same spots. We tried to train her the same way we had every other dog, by taking her outside the very second it looked like she was about to do something, then praising her lavishly if she did. Have you ever had to stand outside in sub-zero weather, crooning, “Go peeps. Go poopsy. Oh, what a good puppy!”?

When it became apparent that Cody wasn’t house-breaking normally (and after coming home to find the crate filled with loose poop, to the point that we had to throw everything out), we finally contacted the vet. After a stool sample was tested, we learned that poor Cody had hook worms. She could not control herself.

Two courses of hook worm medicine later, she finally got herself under control, for the most part. Although she would still pee or poop in the house if she got overly stressed or excited. But most puppies do that, so it wasn’t surprising.

Then, Cody turned 9 months old (seemed a lot longer while reading this, didn’t it? I know it sure seemed longer to me!).

Cody is, in fact, a big dog now. She’s 44.5 lbs and one of the most cuddly dogs you’d ever want to meet, although at the same time, she is a very good watch dog and perfectly capable of taking down an intruder if she feels it necessary. While I’m at work, she seems to spend her day either lying on the couch (that was one battle I eventually lost), or watching out the front window. We close off the doors to the bedrooms and bathroom, but she has freedom to go anywhere else in the house she wishes.

Which, if you’ve been following this blog, you know isn’t always a good thing, especially if I happen to leave my computer on while I’m away.

Would I do it again? I can’t answer that. I’m not sure I would have the energy to catch flying puppies again.

But right now, Cody is here and a significant part of my life. When I arrive home after a stressful day at work, it is just so nice to be greeted by that wagging tail and slobbery face. And during this unusually cold February, it is so nice to warm my hands on that soft furry belly.

And the best part is, that my husband – Mr. Why-the-Hell-Did-You-Get-That-Dog-Anyway? – seems to have grown to love Cody as well. When we discovered the new leak in the kitchen, his biggest concern was that the leak might hit the refrigerator and Cody might get electrocuted, so he moved the fridge and blocked off the kitchen.

Yes, Cody is here to stay. Now if she could just stay the heck off my computer!

35 Responses to What the FRAP was THAT?