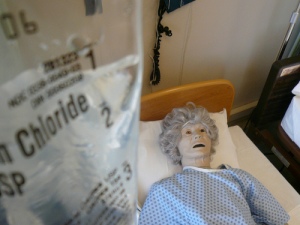 “Ohmygod, I thought she was dead!”

The more experienced doctors in the morning  “doctor parade” immediately ushered that medical student right out of my hospital room.

But she really couldn’t be blamed.  At that point in my battle with ulcerative colitis, I had been in the hospital for a number of days and had been bleeding heavily for weeks.  My complexion was approximately the same color as the sheets on the hospital bed, and I was so weak that I basically just lay there with my eyes shut, waiting for everyone to leave me alone already.  I remember wishing someone could bring my dogs to the hospital so I could hug them just one last time.

In my case, I totally ignored all symptoms for years.  I just assumed that some abdominal cramping and occasional rectal bleeding was normal in a woman my age, and I attributed both to hemorrhoids.  I’d wait for the episodes to pass (so to speak), and then go merrily on my way eating whatever and whenever I pleased.

But then I got scared.  In 2010, the bleeding and pain became constant (24/7), to the point where I was bleeding in my sleep and through my clothes.  I recalled a co-worker previously telling me her mother had died because she had ignored the same symptoms and had colon cancer which was not diagnosed soon enough to save her.

I remember breaking down when my primary physician walked into the exam room and asked the routine “How are you today?” question.  I thought sure I had colon cancer and was going to die.

My primary calmed me down and ordered a colonoscopy.  (Anyone who’s ever had one knows what fun the prep is!).  The colonoscopy showed ulcerative colitis, diverticulitis, and internal hemorrhoids.  Yuuuuuucky!

I began the usual course of prednisone and Asacol HD, and while the symptoms didn’t completely disappear, they did become manageable.  Or so I thought.

Again, I assumed that some bleeding could be expected because my disease was being forced into remission but had not yet gotten there.  So, I never said anything to my colon-rectal surgeon.

Until February, 2011.  At that point, I was very sick and refusing to acknowledge it.  The rectal bleeding had again become constant, and I was running to the bathroom every couple of minutes.  It became the office joke that if [CookieCakes] was seen rushing down the hall, get the hell out of her way!

I found myself doing stupid things like putting the glass in the refrigerator and the milk in the cupboard.  And doing dangerous things, like forgetting that I had turned on the gas burner on the stove.  My driving skills had degenerated to the point that I probably shouldn’t have been behind the wheel at all.  I began to wonder if I was developing dementia.

At night, I would wake up with horrendous cramps in my hands, legs and feet, cramps that seemed to last forever and and would leave me with soreness in the muscles the next day.

In the morning, I would wake up in a pool of sweat, even though it was the dead of winter, and despite the fact that I was shivering from the cold.

I remember being cold all the time (I contributed that to the Buffalo, NY winter), and found myself standing on the floor heating vent at work trying to control the shivers.  Then I looked in the mirror and noticed that my lips looked like I had just eaten a powdered donut, and I had not eaten anything at all that morning.

I called my colon-rectal surgeon, who sent me for blood work and made an appointment for me for that very afternoon.  Cordelia (who at that time worked with me) drove me to and from the lab for blood work (she told me later I looked so bad it scared her).  I then managed to drive myself home from work, but called my husband and made him come home because I was afraid I would pass out in the shower.

At the doctor’s office a little bit later, the colon-rectal surgeon took one look at my face and said, “Go right to the ER.  You don’t look well.”  I was admitted to the hospital that evening.

And that’s why a number of days later I overheard that unsettling comment from an inexperienced medical student.  I was in the hospital for a total of 10 days.  Thank heavens I had a private room with its own bathroom (just lucked out – the hospital was not overcrowded right then).

During the 10-day hospitalization, I was on a number of IV meds – the control panel on the IV stand looked like something out of Star Trek.  One of the IV antibiotics I was given pushed me into a period of violent vomiting, just as the rectal bleeding was coming under control.  And because I could not keep anything down for such a long period of time, and the normal IV solutions weren’t keeping my metabolism balanced, I found myself with a PICC line (intravenous feed through a vein in the upper arm and running to a larger vein near the heart).

But eventually, I was stabilized and sent home, on Asacol HD and prednisone.  Other meds were added and deleted as needed, including Canasa suppositories and steroid enemas.  My disease went nearly into remission, and by early 2012 the outlook was good.

EXCEPT THAT, now I could not get off the prednisone.  Long-term prednisone therapy causes weakening of the bones and can result in things like broken legs or hips.  It is advisable to get off the prednisone at some point, and I couldn’t.  The original 40 mg a day was weaned down in 5 mg increments until I got to about 5 mg a day, at which point, every single time, every one of my original UC symptoms returned.  And I had been on prednisone nearly constantly for 2 years.

(Yes, Cordelia’s Mom had become a drug addict, so to speak.)

NEXT WEEK – THE BATTLE CONTINUES.

DOES CORDELIA’S MOM STAY A DRUG ADDICT, OR DOES SHE EVENTUALLY GET OFF THE PREDNISONE AND INTO REMISSION?