Just When I Was Getting the Hang of It (Sort of)

Friday was approaching, and I wanted a head start on my weekly post.

The story was drafted, all I needed to do was add the photos.  Such lovely photos they were, too, from the previous week’s stroll through Walton Woods Park.

I plugged the USB cord into the camera and the computer and waited.

Fortunately, I have 3 other USB ports on that computer, but I was afraid to try any of them with this particular cord.  I have other USB cords, and tried all of them with the camera.  None of them worked.

Bad enough that I couldn’t transfer the photos, but without a usable cord, I also couldn’t charge the camera battery!

I found a replacement cord on Amazon, and ordered it, but it would take 2 weeks to arrive, and I needed those photos now! 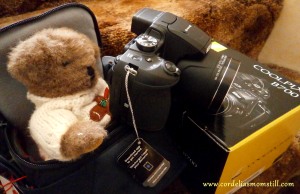 Teddy Rosalie examining the new camera back in March.

On my lunch hour the next day, I drove to the camera shop where I had purchased my Nikon B700 and bought a new USB cord.  I could hardly wait to get home and start uploading those photos!

But guess what – and I’m sure you did guess – the cord didn’t work.  Sure, it fit both the camera and the computer, but nothing happened.

So, come Friday morning, instead of sipping my coffee while reading all those wonderful comments on my newest entertaining post, I found myself in the car heading back to the camera shop, hopefully to exchange USB cords.  They didn’t have the exact one to fit my particular camera, but did gladly refund my money.  I asked if there was any way to be sure the problem was with the cord, and not the camera, and the shop clerk said the correct cord would be needed in order to determine if the camera was defective.  He suggested I might find the right cord at Best Buy.

The camera shop is in Buffalo, and Best Buy is in Amherst – about a 20 minute drive.  But what the heck, I had already driven 20 minutes from Cheektowaga to Buffalo, so what’s a little more driving?

The clerk at Best Buy helped me pick out what he said was the appropriate cord.  I had my camera with me and asked him to please make sure the cord would, in fact, work so I wouldn’t have to come back later.  While I suspect he thought I was a dotty old lady, he quite willingly did as I asked – only to discover that this cord also did nothing.  The clerk indicated he thought it was a problem with the camera itself and that I should contact Nikon.

Back out in my car, I called the camera store and explained what had just happened.  I reminded them that I had bought the camera there and that it was still under the one-year manufacturer’s warranty.  The store manager verified that they do camera repairs, but stated he would probably have to send the camera to Nikon.  I was ok with that.

Another 20 minutes to drive from Amherst back to Buffalo.  Please understand that on a Friday afternoon, Western New York drivers are not as polite as on other days – which means, never.  Traffic was the usual bitch.

My 6-month-old Nikon B700 is now in the process of going back to Nikon for warranty repairs.  The camera shop manager was diligent in removing and handing me the memory card so my photos wouldn’t be lost.

Oops.  Almost forgot about those!  How could I transfer them without the camera?  When asked, the camera manager told me they were out of stock for  memory card readers.

Another 20 minutes to drive from Buffalo to Amherst to buy the memory card reader at Best Buy.  It was the same clerk, and he found the whole thing a bit amusing.

Then, finally, heading home to Cheektowaga – another 20 minutes through pre-rush hour traffic.  I still hadn’t done any of my usual Friday chores, so I opted to go straight home and not pick up early dinner at Burger King like I often do on Fridays. (Keep your comments to yourselves, people.  I happen to like Burger King occasionally.)

It was very late afternoon, but I knew I had to get those photos uploaded in order to publish that post.  And I had to edit those photos.  My work was cut out for me.

Success!  You all read that post, “Into the Woods Again“, but none of you knew what I had to go through to publish it.  Now you do, and I hope you all appreciate the effort.

It’s old, but it still works.

I’m now back to using the old Olympus click-and-shoot that I started out with.  I suspect the photo quality will be pretty much the same, considering the skill (or lack thereof) of the photographer, but I’ll do my best.

As luck would have it, Amazon shipped the replacement Nikon cord on a rush basis.  It should arrive by Monday.  So now I’ll have the right USB cord, but no camera to plug it into.  Ugh!

Such is the life of a blogger/photographer.  No one ever said it would be easy.