You all know how my luck runs, right?  Nothing ever goes the way it should.

We knew when we bought our new home in August that we would need to fence in the back yard so Puppy Cody can run free like she’s used to.  Not being a stupid or naïve consumer, I called three well-known local fence contractors for estimates.  The first contractor was one we had used at our prior house, and we would have contracted with him except that his staff failed to mail the contract to us on a timely basis.

That’s when the stars and planets apparently became misaligned. 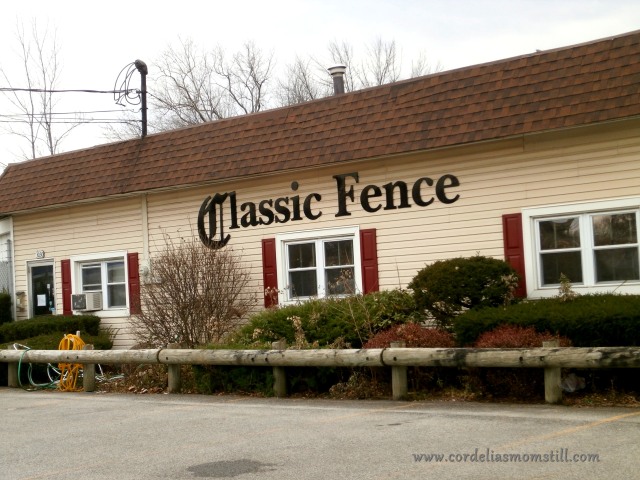 The third estimate was from Classic Fence.  Classic has been in business since 1967 and we’ve seen their fences all around Western New York.  The salesman was as knowledgeable as the previous guy, and this salesman had some better ideas for the installation.  The kicker was that we were promised installation within 4 weeks!  Even though this third estimate came in a couple of hundred dollars higher than the second one, we went with Classic Fence because we were sure they could do the job quicker.  We felt comfortable hiring a well-known local company with long-time roots in the community.

We signed the contract and paid the half-down deposit of $2900.

Once the 6-week mark had passed, I began calling for updates.  The young lady who answered my first call was very pleasant and set up the installation for a specific day in mid-October.

Prior to the scheduled day, I called to confirm when the crew would arrive as we needed to run a hose out of the house for their water supply.  That call was picked up by the owner, Fred DeNormand.  Mr. DeNormand indicated that we were not, in fact, on the schedule.  He pulled our file and reviewed the survey with me.  He assured me that we were near the top of their installation list and that there were only one or two other jobs ahead of us.  He indicated he would check their schedule and call me.

I never received that call.

And then it began to rain … and rain.  I understood that no one would be installing anything until the rain stopped, but being me, I wanted to keep apprised of when we might expect the work to be done.  I was afraid if the weather turned cold, the sidewalks would become slippery, and I could fall and break something during Puppy Cody’s early morning walk.  That thought was terrifying.

Halloween came and went, and we did not have a fence.  It was still raining.

I began calling Classic Fence weekly.  The older woman who subsequently answered the phone was pleasant but it appeared that English was not her first language.  Be that as it may, she repeatedly assured me that we were next in line for installation.

In desperation, I called the salesman who had drawn up our contract in hopes that he could maybe put some pressure on.  The salesman informed me he had left the company three weeks before, after a five-year employment.  He didn’t go into details, but I gathered it was not a particularly amicable parting.  The salesman did, however, give me the cell phone number for the crew foreman, so I could check status.  I hesitated to use that number because I thought it would be too pushy.  I would give the office the chance to get their schedule in order.

Had I Googled “Classic Fence” at that time, I would have discovered that there was a long list of customers awaiting installation, all of whom had given sizable deposits.  But I didn’t run that Google search.

Finally, in mid-November I received a call from the foreign-accented lady at Classic Fence, informing me that our installation was scheduled for Thursday, November 30.  What with Thanksgiving coming up, and the fact that it was still raining, I didn’t think it odd to schedule so late in November.

On November 29, I called Classic to confirm the crew’s arrival time the next day so that hubby could run that hose outside.  There was no answer, and no voicemail.  I tried numerous times throughout the day, with the same result.  In desperation, I dug out the cell phone number for the crew foreman and left a voicemail message on that.  I received no return call.

Being optimistic, we went ahead and set up the water supply for the next day’s installation.

The morning of November 30, I waited … and waited.  The foreign-accented lady had previously told me the crew would likely arrive between 9-9:30 am.  They didn’t.  The office phone remained unanswered with no voicemail.  The cell phone for the crew foreman went unanswered.

It was then that I did the Google search and was stunned by what I learned.  Our local TV station, WIVB, had received numerous complaints to their Call 4 Action line, and they tried to step in (see WIVB stories: “Fence company racks up customer complaints, pledges to improve” and “Fence contractor to ‘pay it forward’ for firefighter’s widow“).  Fred DeNormand claimed a bookkeeper had absconded with his money, and he was having trouble finding competent help, but he indicated he would start issuing refunds to anyone who wanted one and would make every effort to catch up on the backlog of work orders.

People who contracted with Classic Fence months before I did were still waiting for refunds and/or installation.  It didn’t make me happy.

Classic Fence has $2900 of my money, and now I was pissed.  I drove to their office, only to discover a locked door with a notice that the business was closed “for inventory/audit” and would reopen “on Wed” – but the notice didn’t specify which Wednesday.

I returned home and tried to call WIVB Call 4 Action.  The phone was picked up by a poorly spoken woman who merely said “hello” and when I questioned why she didn’t answer “WIVB” or “Call 4 Action“, she said she had something in her mouth (sounded like a mouth full of caramels, actually – if I may be so snarky).  The Call 4 Action lady said they did not have any information on story updates regarding Classic Fence, and gave me a different number to call.  The second number turned out to be the WIVB switchboard, which got me a list of menu options – one of which put me right back to the first number I called.  I gave up.

It appears that hubby and I may be out $2900, although we will take every legal step available to try to reclaim it.  Winter is upon us, and there’s no sense trying to sign up with a different fence contractor at this point.  Puppy  Cody has learned to walk on leash, and the two-walks-a-day routine seems to be working for all of us.

The good news is – I won’t have to immediately shell out the second $2900 which was set aside for the fence installation.  Considering the present reduced finances at my house, having a little extra cash (especially at Christmas time) is rather appealing.

By spring, I will be working again and able to hire a different contractor, assuming we still want the fence.  I think I’ll call back that second guy and hope he doesn’t go under, too.

Such is  life in the world of  Cordelia’s Mom.  How’s it by you?