What I Did On My Day Off

’cause I’m sure you’re all dying to know.

While folks in Great Britain were preparing for their Big Event (Harry marries Meghan), I was undergoing my latest upheaval.

Yes, the new kitchen (such as it is) has arrived.

Bear in mind that my house has a very small kitchen area, so small that I decided to install apartment sized appliances in order to save space for walking around in.  The original 1939 metal kitchen cabinet was a monster and took up way more area than necessary, in addition to being extremely dirty after 70+ years exposure to cooking grease and cigarette smoke.  It couldn’t be cleaned, the porcelain sink was pitted.  Even repainted and reglazed, it would still just always be an old metal cabinet that would clash with the wooden cupboard above it.

If you follow this blog regularly, you’ll remember (if not, click here) that my plumber, who apparently also renovates houses on his free time, had told me that for the price of repairing the deteriorated pipes under the sink, he could install an entire new unit, including stainless steel sink, new faucet, wood cabinet and composite countertop.  I don’t need top-of-the-line anything, and the price was exceptional.

So we went for it. 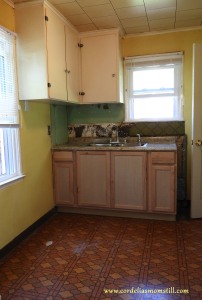 Cabinets, walls and ceiling will be painted, and floor will be replaced – eventually

The new unit is a little shorter in length, slight narrower in depth, and an inch or so lower than the original unit.  It fits the kitchen, and being wood, it matches the upper cupboard (or at least will, once painted and once the decorative hardware is added).  Now, we can even open the kitchen door fully whereas before it would open only halfway before hitting the cabinet.  That may not seem like a huge deal, but just try coming up from the basement with a full load of washed clothing and having to squeeze between a half-open door, the cabinet, and the stove!  Now it’s easy peasy.

Also, much easier to get Puppy Cody in and out without tangling the leash.

The dirty metal monster, uninstalled and about to go out the front door

The install only took about 4 hours because our guy definitely knew what he was doing.  Although he did need an assistant to come help him drag the old metal cabinet out to the truck.  No way could I have done that as a DYI project!

Other than the balance of the windows (which will be installed in about 8 weeks), it would appear that the major inside work has now been completed, and all that’s left is cosmetic updates – kitchen floor, painting of interior walls and ceilings, curtains, hanging artwork, etc.  But we can do all that a little at a time, and as the money allows.

Photo downloaded from TroyBilt.com – click on photo for link to site

And hubby is very pleased with his new toy, which also arrived on my day off – a cute little riding lawn mower.  We opted for the small one  because our one-third acre, while a little larger than people our age can comfortably cut with a push mower, simply does not justify a John Deere tractor.  Plus, the smaller mower takes up so much less garage space.

At this point, I need to give a few points to Lowes, to which I had given a bad review previously.

This time, the delivery arrived when it was supposed to and the gentlemen who brought the mower were knowledgeable, courteous, and took a little extra time to make sure we understood how to use it.  I was quite impressed as I really had expected Lowes to send the darn thing out in a crate on a UPS truck and leave us to deal with it.  We had specifically asked for a mower “new in the box” so as to avoid getting one that had been outside the store and on which people and their kids had been playing, perhaps damaging parts.  We were willing to uncrate the mower and assemble the steering wheel, although it probably would have been a bit of a hassle.

So, I was very pleased when the mower arrived fully assembled, with oil and ready to go.  The Lowes guys told me it had been uncrated and assembled at the store that very morning and had never been on the store lot.  That made me very happy.

Unfortunately, it rained after the mower arrived and has been raining this morning, so the first test ride hasn’t been taken.  But I think it will work out just fine.

Next on the agenda – the fence is finally scheduled for installation, right after Memorial Day.  Cody and I can hardly wait.  I even went out and bought myself a nice new outside chair (only $15 at Walmart!)  so I can truly enjoy the yard once there’s a little more privacy.

See you all next week.  In the meantime, may all your upheavals be happy ones.

Images by Cordelia’s Mom, except for Troy-Bilt photo, which was downloaded from the corporate site (click on photo for link)

18 Responses to What I Did On My Day Off