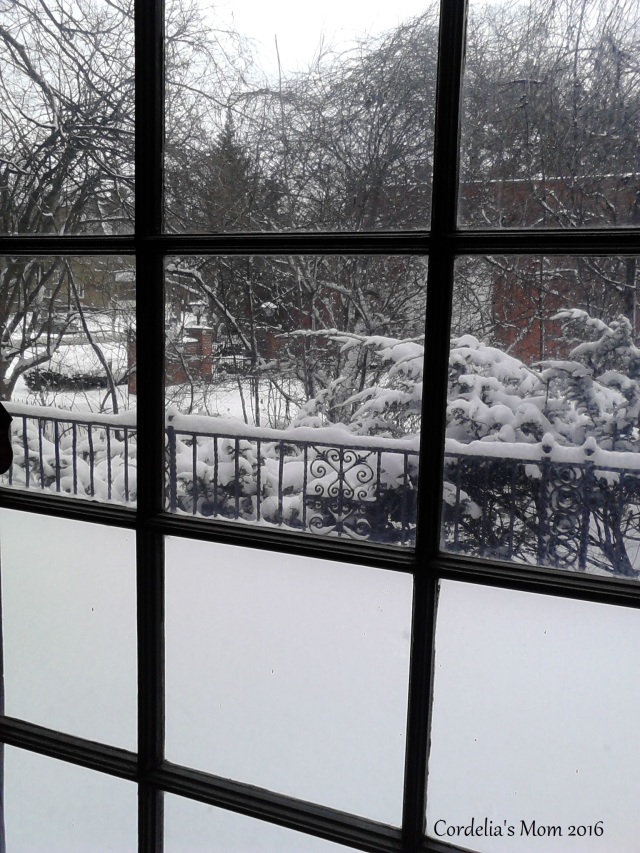 Winter has finally arrived in Buffalo, NY.  There was 8″ of snow on the ground this morning in my northern suburb.  How do I know it was 8″?  It was to the top of my boots, and my boots are 8″ high.

Hubby had gone out last night and shoveled the drive, and it only snowed a little after that so there was no need for either of us to shovel again this morning.  I did need to brush 8″ of snow off my vehicle, however.

As I was brushing off my car, I glanced over and saw the neighbor‘s 12-year-old son scraping her car.  Which is fine, of course, except that I know she doesn’t work, and never drives her son to school, so why couldn’t she do it herself later?  The kid was obviously going to be late for school.

I’m 63 years old and I clean off my own car.  I even manage to shovel the driveway if hubby isn’t around.  The neighbor is only in her late 40s or early 50s and does not have any physical disabilities.  She’s just lazy.  As far as we’ve seen, she does absolutely nothing to maintain her property (maybe that’s why she has rats, and no one else does?).

Next thing I knew, the kid got into the driver’s side seat, turned the car on and began running the wipers and playing with the controls.  WTF?  I’d like to think that Mommy did, in fact, come out and drive her kid to school, but I seriously doubt that.  Maybe the kid was going to drive himself to school?  Wouldn’t surprise me, and I didn’t stick around to witness any further foolishness.

Although it might have been fun to watch her (or him) try to get that foreign subcompact with the nearly flat tires through the 8″ of snow still on her driveway, as well as the more than 8″ at the apron where the plow had gone through.  That alone would have made my day.

Such is life in the snow belt.  As much as I love ranking on my loony neighbors, I’d gladly give up the fun if it meant no snow.  Snow is pretty, but it’s a pain in the …

19 Responses to The Neighborhood Saga Continues