My [Paperclip] Cup Runneth Over

While it certainly was annoying to get to the office and discover the air conditioning had died and the interior temperature was 88° F – just two days after the AC had originally died and been “fixed” – it was really nice when the boss arrived an hour later and told everyone they could leave. My first inkling of that was when I read his email to the building management indicating that due to the high temperature in the office, “no clients can come in, and staff has been encouraged to go home.”

It was an added plus that I would not have to spend a good part of my day digitally archiving files and then sending the physical files for shredding, as we attempt to weed out really old files and save storage space.

When we first started the shredding project, I thought all paperclips and clasps had to be removed from the files.  Several hundred clips had been accumulated before someone thought to call the shredding company and learned that we could send the files in toto – clips were not a problem.

What can you do with paper clips, other than the obvious?

As a young woman sharing my first apartment with several other young women, none of whom had any money for decorations, paper clips were used to make a divider between the living room and the dining area.  They actually were quite attractive, especially during parties when they caught the candle light.  Perhaps not quite so attractive towards the end of the parties when those people who had imbibed a bit too much found it difficult to negotiate an untangled path through that divider.  Also, not so attractive when the landlord found that decoration and freaked out because 1) paper clip chains are HEAVY, and 2) we had attached those chains to the ceiling using cup hooks, leaving holes which would have to be repaired.

Lucky for us, our respective employers never found out we were smuggling those clips home in our purses!

At least, we never tried to make jewelry out of paperclips, although I’m sure it could be (and probably has been) done.

As an aficionado of mindless vidoegames, I’ve learned that paperclips come in handy when locked out of a house:

Or locked into a room (especially a Victorian room): 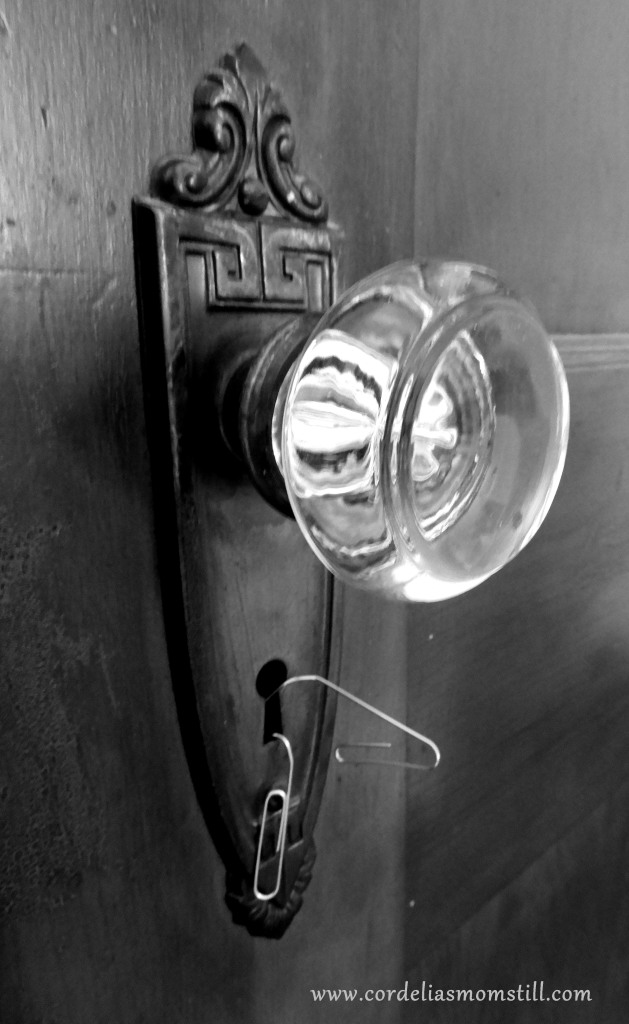 Those games have also taught me that if a zipper breaks on any article of clothing or carryall, the simplest repair is a paperclip:

Fortunately, I don’t play any violent videogames.  Otherwise, I might be forced during gameplay to use an unwound paperclip as a weapon (through the eye or up the nose, into the brain).

Of course, no “household items” post is complete without the requisite internet search.  Click here for a history of paperclips – which apparently have been around since the late 1880s (I would have thought longer, but then what do I know?).  That article also points out another paperclip use which I had forgotten – as a “long, thin object” to reset a button on a Smartphone or other device, or to eject an SIM card.

So much for today’s decorating and history lesson.  I must go untangle those chains I put together for the photo shoot.  Teddy Rosalie wasn’t thrilled to sit behind the “curtain” – but Puppy Cody refused to sit still at all.

Another week down, folks.  Enjoy your weekend.

9 Responses to My [Paperclip] Cup Runneth Over