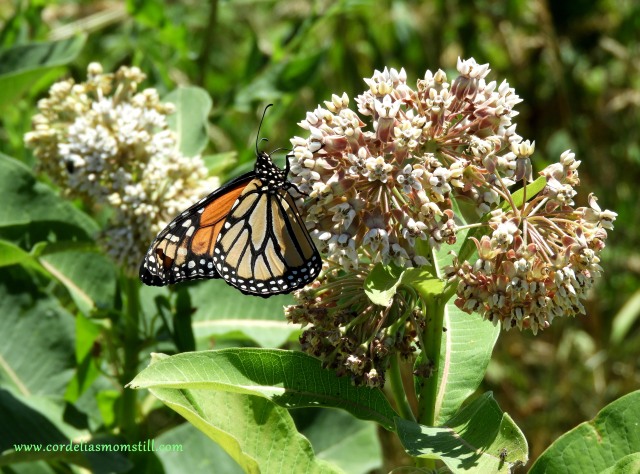 The Fourth of July is over, folks!  You can stop with the fireworks, already.

After all the boom-booms before, on, and after the 4th of July, Puppy Cody was seriously traumatized.  While she would (reluctantly) still go out in our own backyard, taking her for walks to the local high school became more hassle than any of us needed.  It seemed that the minute we would park and she would think about jumping out, someone would blow off a cherry bomb somewhere, and it was all over.

So, we decided to take have a few no-walk days to allow Cody time to recuperate.  We didn’t want her to associate loud scary noises with the school.

At the same time, hubby decided he really needed to get away from the house, if only for a few hours.  He’s been working on household projects pretty much every weekend since we moved in last year, and just wanted one weekend off.  I was ok with that.

So, on Saturday we packed cold drinks into the car and headed up the Niagara River towards Niagara Falls.  Our intention had been to drive to the Falls, but we left late due to having to coax Cody into the yard, and due to various household tasks that still needed to be accomplished.  Plus, the fact that I am somewhat limited as to how much I can walk didn’t bode well for climbing the path at Devil’s Hole or anywhere near the brink of the Falls.

Not too far from home are several lesser parks where you can get right to the edge of the river.  We chose one on River Road in North Tonawanda – I don’t know the name of that particular area since there’s no sign.  Basically it consists of a path along the river, with lots of benches facing the water, and a small boat launch.  It’s not one of the more popular riverside parks.  Very few people – perfect for me.

Not a lot to see on this particular trip – just the butterflies and the usual ducks.  While the butterfly accommodated the photo shoot (see photo at head of post), the bumblebee I tried to photograph simply wouldn’t cooperate.  I felt it best to let him/her go on his/her way.  The ducks and gulls, as usual, love to sit and pose: 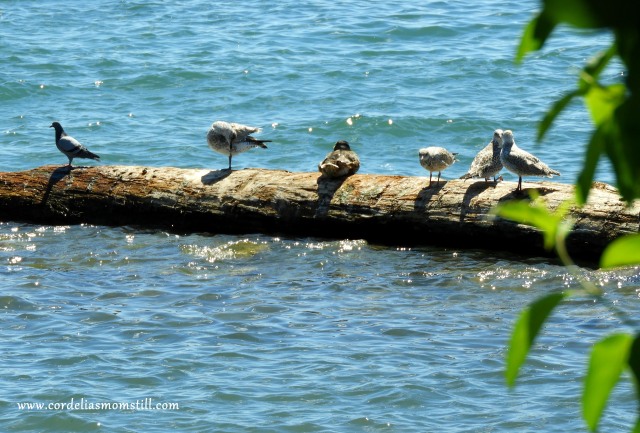 I decided to try the zoom lens on my camera.  The Niagara Falls skyline, which was extremely hard to see with the naked eye, came into focus beautifully with the zoom:

Now, if only I can learn to hold that camera stead while I shoot!  I really don’t want to invest in a tripod.

After a short walk and a even shorter sit on the benches, we went for a quick dinner and then headed back home.  Not an extended day off, but relaxing nonetheless.

Come Sunday, hubby decided Cody really should get a walk – somewhere.  The school is iffy, we were afraid people might still have a few fireworks left and didn’t want Cody to refuse to ever walk at the school again.

So, we packed ourselves and Cody into the car and headed off to Walton Woods Park in Amherst.  A bit of a drive at about 20 minutes, but Cody seemed to enjoy the ride.

At the park entrance, Cody heard people talking, and balked.  It took a fair amount of encouragement to get her headed into the park instead of back to the car – and believe me, that dog is strong and stubborn!

But eventually, she began moving again.  Once along the lake, she suddenly realized there were sounds and smells she never experienced before and started trotting along quite nicely.  We tried as much as possible to keep her on the grass instead of the asphalt pathway to avoid burning her paws.

I thought sure she would jump at her first hearing of a bullfrog call – but she seemed more curious than scared.  There are lots of bullfrogs in that lake.  It sounded like one of them was right below where I was standing and I got as close to the water as possible, hoping to catch that award-winding photo.

Alas, I nearly fell in and had to abandon that plan.  Retreating to the pathway, I decided to simply take another photograph of the lake:

Fortunately, Cody became comfortable enough in her walk to do her business.  Yay!  And, there are trash cans placed strategically around the lake to dispose of that business.  Double-yay!

Even better, there are benches placed strategically around the lake for those of us who need to rest often.  Triple-yay!  And a huge thanks to the Town of Amherst or Walton Woods Homeowner Association, whichever one is responsible for those strategic placements.

I love that little park.  I especially love that you pretty much have to already know where it is in order to find it – there are no Walton Woods signs at the entrance (unless the locals removed them to maintain privacy, which is very possible).  I don’t even remember how we found it.  I think we just happened at some point to see people walking into the woods between the library and the policy station and wondered where that path went … and decided to find out.

All-in-all, a nice relaxing weekend.  Hope yours was, too!

24 Responses to Just Flitting Around