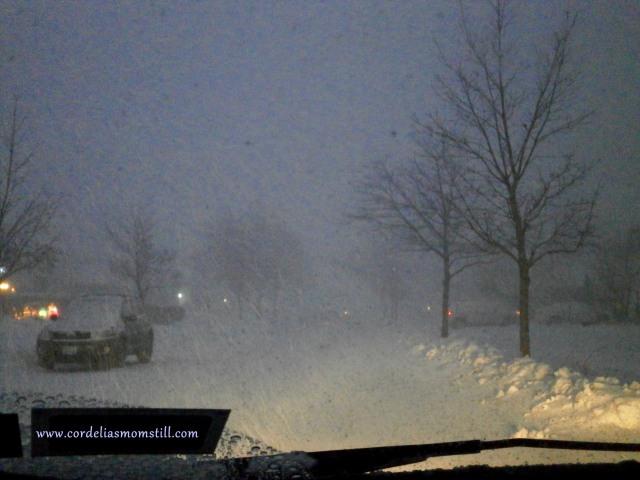 … something I’ve already had enough of — WINTER!

I know many of my readers think that Buffalo, New York is the Snow Capital of the World.

But we really don’t get any more snow than, say, Syracuse (right, Mark Bialczak?).   Unfortunately, the storms we do get tend to make the national news.  Fortunately, today was just a normal Buffalo, New York winter day – but that doesn’t mean I have to like it.

I was busily cranking out the work, dealing with clients, getting ready for the next day-from-hell.  I vaguely recall hearing someone in the office say that the County Clerk’s Office had closed earlier in the afternoon, and vaguely recall thinking, “Well, at least I don’t work downtown any more.”  There is a window outside my little closet work area, but I was too busy to look.  Every once in awhile, I’d hear someone comment about the snow coming down – swirling, sideways, what fun we’ll having going home tonight.

I figured by the time we all left at 5:15 pm, pretty much everyone else would have already gone home, so maybe traffic wouldn’t be too bad – and maybe the plows would have gone through by then.

Imagine my surprise when at about 4:00 pm, word came around that the OFFICE IS CLOSING!  Several people made a special point to make sure I was aware of it – ’cause, you know, I’m just so dedicated.  Even The Boss made sure to tell  me to shut down the computer and leave already (I was trying to get that one last email out to firm up details for a closing scheduled for the next day).  It only occurred to me later that The Boss wanted everyone else to leave so that she could – she didn’t want anyone stuck behind.  Gotta give her credit for that.

Well, you don’t have to tell me more than twice to drop my work and leave.

The snow had only accumulated a few inches, so getting out of the lot was not difficult – although I did manage to slip while brushing off my car, grabbing onto the passenger side door and not realizing it – so that when I then began to drive, I got one of those warnings telling me a door was ajar.  Had to pull off to the side and fix that – which of course, meant, I had to brush the car off again.

There was an accident just up the street, and cars were bumper to bumper and not moving.  Fortunately, drivers were letting us out of our lot one by one – except, of course, for the jackass down the line who merely laid on his horn constantly.  How does that help?

SLOW AND EASY – THEY PROBABLY CAN’T SEE ME, EITHER!

Visibility immediately went from  not good to really not good.  My normal 12-minute drive took nearly an hour, even using back streets.  But at least most drivers were being considerate and taking it slow. 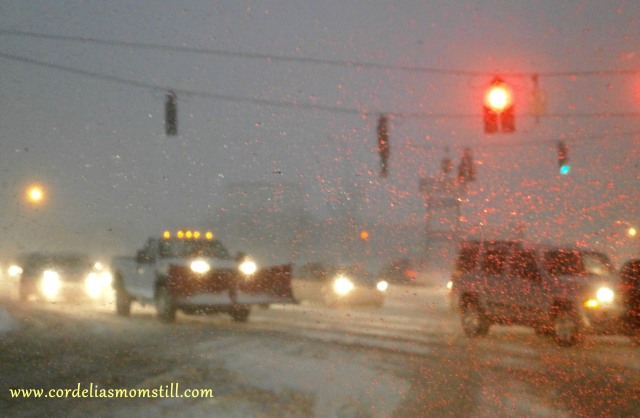 In fact, travel was slow enough that I could take all these photos.  And aren’t you glad I did?

Finally, I reached my own street (which I nearly missed because I couldn’t see a darn thing).  Home Sweet Home!

PS:  Puppy Cody loves chasing snow balls, but I forgot to take the camera out with us.  Bad me.

32 Responses to It’s Beginning To Look A Lot Like ….