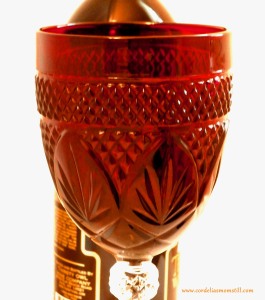 Like many kids, my three daughters were a pain in the butt growing up.

But eventually, they became young women whose company I enjoyed, and who were [finally] willing to be seen with their mother.

Mostly, it began with our infamous college inspection tour.   (If you haven’t read that post, click here.  You’ll be glad you did.)  We had a great time traveling together, even if the youngest claimed to be “terrified” of my driving through a rainstorm.

At some point, it occurred to me that it would be fun to plan annual mother-daughter weekend trips.  We managed two before we all ran out of money/developed other hobbies/acquired significant others (the girls, not me – my husband would have disapproved of such an acquisition)/got tired of each other.

The first of these trips was to Niagara-On-The-Lake in Ontario, Canada, just over the bridge from our then home in Tonawanda, New York – less than a half-hour drive, assuming the driver doesn’t get lost.

Which, of course, I did.  Not seriously lost, but I did manage to miss the approach to the international bridge.  It wasn’t my fault (and I’m sticking to that story).  I had taken back roads, there was road construction, and I couldn’t find the right on-ramp because it wasn’t well marked. 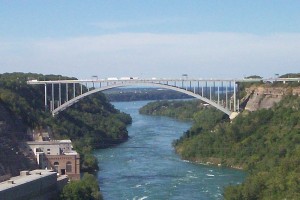 I eventually found myself driving over a bridge, and suddenly realized I was, in fact, on the Lewiston-Queenston bridge and fast approaching the Canadian border – and my ID was somewhere in my purse, but God knew where my purse was!  Imagine the border guard’s amusement as he watched an American car approaching while the driver and her passengers were frantically searching through the glove box, console, under and between the car seats, etc.  Sure, back then I probably could have gotten into Canada without ID, but getting back into America after the weekend would have been a no-go.  I didn’t want to spend the rest of my life in Canada.

Fortunately, the ID was located.  I won’t tell you where.

Our trip to Niagara-On-The-Lake was to see a play during the Shaw Festival.  We drove up the day before and stayed at the Riverbend Inn & Vineyards – a beautiful Georgian-styled inn within minutes of the bridge and a little outside of the town itself.  It reminded me of the plantation Tara in Gone With the Wind, but with grape vines instead of cotton fields.  The Canadian-American currency exchange rate was good, making the Inn affordable for us.

We had a lovely suite, with a sitting room and a fireplace.  The Inn had its own dining room, with a piano player.   The menu offered a variety of gourmet meals – and, of course, wine.

The wine was somewhat more expensive than my normal fare, but since my oldest daughter was now over 21, I felt sure she could help me drink it, so I ordered an entire bottle.  Unfortunately,  my daughter then informed me she had taken some medication which prevented her from drinking.  There was an entire bottle of expensive wine, and we were eating in the same inn where we would be sleeping – and yes, we could take any leftover wine upstairs with us.

So, we did.  My girls and I watched movies, and I finished off the wine.  Did I mention it was an entire bottle, and I was the only one drinking it?

I don’t remember the movies.  I do remember waking up at about 3 am and puking in the bathroom.   My youngest was very concerned and asked if I had the flu.  No, just something I ate, I replied.

The next morning, I hadn’t improved much.  We ordered room-service breakfast – cooked to perfection and beautifully presented, but all I could eat was one tiny corner of pastry.  And coffee, lots of coffee.  I think my oldest daughter suspected what was up, but wisely said nothing.

The play was scheduled for mid-afternoon, and we wanted to do some shopping first.  By the time we left the Inn, I was well enough to drive.

But lunch was a challenge.  I was feeling a wee bit better, but the idea of looking at, much less eating, food was not at the top of my list of things-I-want-to-do-today.  For the sake of my girls, I faked it as best I could.

Which apparently wasn’t all that good.

Halfway through our lunch, my oldest daughter looked at me twirling uneaten food around my plate, nodded, and said in a stern, matronly voice:  “Now, Mom, let this be a lesson to you.”

It still turned out to be a great trip.  The play was awesome!  Our trip back to the US after the play was uneventful.

And the best part was – to this day, my girls have never told their father about my indiscretion.  Nothing like a few girly secrets during mother-daughter time, and it gives us something to laugh about now that we’re all (including me) adults.

Subsequent trips were wine-less, or at least wine-conservative.  Best trips ever!

Top Image by Cordelia’s Mom; others downloaded as indicated under photo