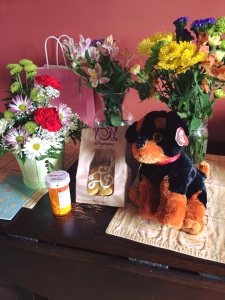 There are those who walk on water, but few who can walk on ice.

Anyone who is a parent knows how the heart races when the phone rings at 2:30 a.m.  It’s never, ever good news.

“Uh, mom, can you maybe come get me and take me to urgent care?  I fell and hurt myself.”

Well, at least she was the one calling me, so I knew she was conscious.  How fast do you think you can get out of bed, dressed, in the car, and to someone else’s house?  Faster than you think.

Upon arriving, I was met by Daughter #2 and her boyfriend.  Naturally, I had to ask why I was called out in the wee hours of the morning when the boyfriend was on site and had a car – turns out it was the boyfriend’s birthday and there had been a celebration during which the boyfriend had been drinking.  Daughter #2 was the designated driver so wasn’t drinking [much], but still managed to fall on black ice in their own driveway, breaking her right wrist.  At least the boyfriend realized it would not be wise to get behind the wheel of a car – hence the call to Mom.

At the emergency room, x-rays showed a “very, very bad break” (in the scientific terms used by the ER doctor.)  An orthopedic surgeon was called in.  After an hour or so of traction, the wrist was re-set as much as possible (big ouch!), a cast was applied, and surgery was scheduled for two days hence.

The day of surgery, we were to arrive at the hospital at 3:00 pm.  I took the entire day as my regular day off, figuring I could sleep in a bit.  Around noon, Daughter #2 got a call from the surgeon saying he was behind schedule and don’t go to the hospital until 4:45 pm.

At 6:00 pm, we were still in the pre-op area.  The surgeon came out between procedures and asked if Daughter #2 preferred to stay or re-schedule for the next morning, as his next operation would take 3 hours.  He said he didn’t mind doing her operation and that he was used to working that late, but it was up to her.  Daughter #2 was already hooked up to IVs (naturally, it took more than one stick, the poor girl), and just wanted to get it over with.

The ambulatory surgery unit closes at 9:00 pm, but the nurse caring for Daughter #2 agreed to stay with her until she went into surgery.  After surgery, she would be transferred to a regular hospital room upstairs.

Surgery started at 9:45 pm.  I was directed to the surgical waiting room, where there was a huge airport-like screen showing the status of the various patients in the operating suites.  Each name was color-coded for pre-op, surgery, recovery, discharge.  The only problem was that since the ambulatory surgery unit closed at 9:00 pm, there was no one to update the board.  I finally realized this fact after staring at that  damn board for about half an hour and noticing that not one single patient had been moved – and I began to doubt that the guy who went into OR5 just ahead of Daughter #2 was still in there, even though the board clearly indicated that he was.  (Was the surgeon doing two simultaneous surgeries?  I didn’t think so.)

At midnight, the board finally refreshed – deleting all the current patient names and listing the names of patients scheduled for surgery the next day.  Meanwhile, the lights in the waiting room would periodically be turned off, until someone realized there was family still in there.

It was well after midnight when the surgeon finally appeared to tell us all had gone well.  We went sent upstairs to await my daughter’s transfer to her room.

On the way up, we were met by the anesthesiologist, who was searching for Daughter #2’s glasses.  He said she was feeling dizzy despite the medications she had received, and he thought wearing her glasses would help.  I must say I was impressed – how many doctors would go to the trouble of personally tracking down a patient’s eyeglasses – wouldn’t they just send a nurse or an aide?

Finally, Daughter #2 was brought in.  Earlier in the evening, the surgeon had asked if she’d care to spend the night rather than go home after surgery, and she had refused because she has crappy insurance.  But after surgery – perhaps because it was so late or perhaps because she was not recovering as quickly as desired – she was told that she was staying for observation until the next morning.  I silently cheered – really, neither the boyfriend nor I were the best ones to take care of her during the first few hours after surgery.  We would have done our best, but it’s not the same as having nurses who can run in and shoot those narcotics right into the IV line.

I finally went home at 1:30 am, once I was sure she was stable, and the boyfriend stayed until 2:30 am.  She didn’t care that I left, but I understand she was a little upset when the boyfriend said he had to leave.  (Listen up, mothers – there will come a time when your child will forsake you for another.)

When I returned the next morning, I was happy to find Daughter #2 sitting up in bed, watching TV and in good spirits.  The boyfriend had arrived before I did.  The discharge orders were written, and she was finally released early in the afternoon.  Did she ask Mom to help her?  Nope.  The boyfriend did everything.

But that’s OK.  Until this incident, I wasn’t sure about the strength of the relationship between Daughter #2 and her boyfriend.  Now I’m confident that she has a good man who truly cares about her, and that she is willing to let down her guard and allow him to help her.  (And trust me, while Daughter #2 was in x-ray two days earlier, the boyfriend  and I had a chat of the sort to make any mother happy.)

The great Wrist Incident of 2016 has ended, and not a moment too soon.  Daughter #3 is in the middle of closing on a new home, and old Mom is beginning to bend under all the stress.

Top  image by Jamie; second image by Cordelia’s Mom (who is probably going to get major grief for posting it)

43 Responses to Slip Sliding Away