I am no longer a virgin – I finally had my very first wine tasting.

Sad to admit, considering my proximity to the Niagara and Finger Lakes wine trails, and considering how much I enjoy wine. But truth be told, I’ve never paid much attention to various wines other than to choose what tastes good to me.

On Sunday, my youngest asked me to go along with her on a mini-wine tour of the Niagara Region. She wanted to stock up her wine supply, but since she is fast becoming a wine snob, she couldn’t just go to the local liquor store to pick up whatever’s on sale, like I do.

So, off we went. There are an incredible number of wineries in the Niagara Region of New York State, and we only had a Sunday afternoon. Since I was driving, I planned a route I knew I could handle easily, and we chose wineries along that route. Our tour started in Lockport, which is an easy drive from my home in Tonawanda. 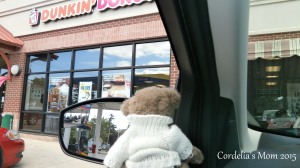 We barely got past the County line when my daughter decided she had to make a bathroom stop and pick up some food (she hadn’t had breakfast).  Teddy Rosalie enjoyed watching the people going in and out of Dunkin’ Donuts.

I know a great “back streets” route to Lockport which I use when attending Niagara County real estate closings. Naturally, I had to show my daughter where the Niagara County Clerk’s Office is (doesn’t everyone want to know that?). Unfortunately, that was the farthest I had gone on my “back route” and we were heading towards Medina, NY. Thank heavens for Mapquest and GPS.

Inside, however, was a real treat. The wine shop was small, but clean and well-appointed, and the staff was very friendly and knowledgeable. We were allowed to choose 4 wines each for our tasting (we shared, of course, so in essence we each tasted 8 wines). The reds and whites were served in separate glasses, which were rinsed between wines. The requisite crackers were available to clean the palate between wines. Very nice wine, even for my unsophisticated palate – I bought 4 bottles there, and my daughter bought 3.

We had both seen this winery on the trail map, but since neither of us knew anything about mead – and it required additional travel beyond Leonard Oakes – we had decided to skip it. However, the sommelier at Leonard Oakes had said, “Hey, you know, you might like 810 Meadworks – it’s only a few minutes up the road.”

So, what they hey – up the road we went.

Daughter, especially, loved the shop in the old Medina, NY building. I loved the fact that there was off-street parking. Inside, it resembled an old fashioned pub, and the owner/mead-master was down-to-earth and welcoming.  The tasting allowed for 4 wines each – again, we shared. The tastes were served in adorable little glasses which made my daughter exclaim that she needed to get some like that. My daughter discussed with the owner the difference between mead and wine, and how mead was made. Meanwhile, I concentrated on my glass.

Most of the meads were too sweet for my taste, but I still found 2 that I liked and bought (the red called “Sweet Devotion” will definitely be a Saturday night hubby/wife treat). Daughter bought 2 of bottles of the sweeter meads.

I didn’t think I was feeling any effects from the 16 wines/meads that I had sampled, and Daughter seemed fine, so off we headed to the next one. We had started at Leonard Oakes because it was farthest from home – on the assumption that if we did become a little tipsy later on, we would already be closer to home.

After leaving 810 Meadworks, we intended to wend our way back to Leonard Oakes to pick up our pre-determined return route. After about 10 minutes, I realized that none of the scenery looked familiar. Passing a large dairy farm, I said, “Gee, I don’t remember seeing that on the way to 810.” My daughter responded, “That’s because we never came this way – you missed the turnoff back there.” Yes, she had let me miss a turn because she thought Mom knew the way (hey, I only told her I knew how to get to and from Lockport, not Medina!). And, of course, we were far enough out in the country that her GPS had no service.

But, I’ve been lost before, so we simply turned around, went back to Medina and started over again. 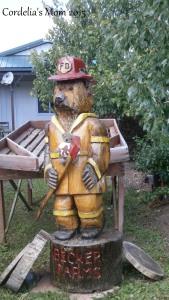 I had hesitated to add this to our list because it was Sunday, and I know that Becker Farms is a well-known tourist attraction. Lots of elementary schools take students to Becker Farms on field trips during apple season. I didn’t even know there was a vineyard there!

(There’s an alpaca farm between Leonard Oakes and Becker Farms, and we had hoped to stop there, but we discovered it was not open that particular day. That’s OK – now we have an excuse to go back.) 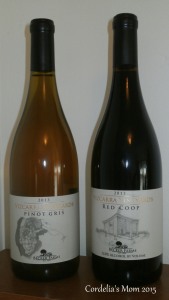 Becker Farms was charming – even more so on the day we visited, because they were setting up for a wedding. After stopping in their old-fashioned ladies’ room (half-doors on the stalls – really?!), we went for our wine tasting. Again, we were allowed 4 wines each. Most of the wines, while excellent quality, weren’t to my taste, but I did find 2 to take home. Daughter bought 2 of her own.

Now, we were feeling just a wee bit buzzed, so it was time for food.

One of my co-workers lives in the Lockport area and told me about a cute little diner in Wrights Corners, called Gordie Harper’s Bazaar. She indicated it had good, reasonably priced food, and a boutique shop we could browse if we wanted a wine break.

Gordie Harper’s has a very nice patio area, and it was a beautiful day. Our friendly waitress escorted us outside and sat us far away from the table of women having a somewhat rowdy bachelorette party (the penis-shaped straws would have been a dead giveaway even if they hadn’t been so loud).

I had looked up the menu before we went and already knew exactly what I was going to order – grilled bologna & onions with cheese on a roll, with a side order of sweet potato fries. Daughter had a club sandwich and regular fries. Portions were generous, and the price was almost laughingly reasonable.

After lunch, we went through the store area of the restaurant, where I discovered homemade baked goods. Since I knew we would be arriving home later than originally planned, I bought my husband a fresh blueberry pie. Yum!

Back into the car for the last leg of our journey.

This was to be the highlight of our mini-tour, according to my daughter – but she had stated that we should try to get there fairly early because they offer railroad excursions, and today’s mystery murder railroad ride was due at Spring Lake at 3:30 pm. We got there at 3:20 – how’s that for timing?

This particular winery has a driveway that winds through the woods until you finally reach the vineyard – not a drive I would want to do in the winter. Very small parking area in the back, but I managed to find the last remaining open spot.

The shop and its adjoining patio area were charming, but the wine was disappointing. The tastes were served in small plastic glasses like the ones you get in motel rooms. Again, we were allowed 4 wines each, and none were of the quality to make us jump up and say, “oooo, that’s good.” I did, however, manage to find a Riesling that I thought my husband might enjoy.

I didn’t even realize until after I got home and looked at my bottle of Riesling that Spring Lake is not local – it is California wine! I could have just gone to my local wine store.

We hadn’t been sure how many stops we could fit into the day, but the Spring Lake visit was short. So, on we went to our final destination. 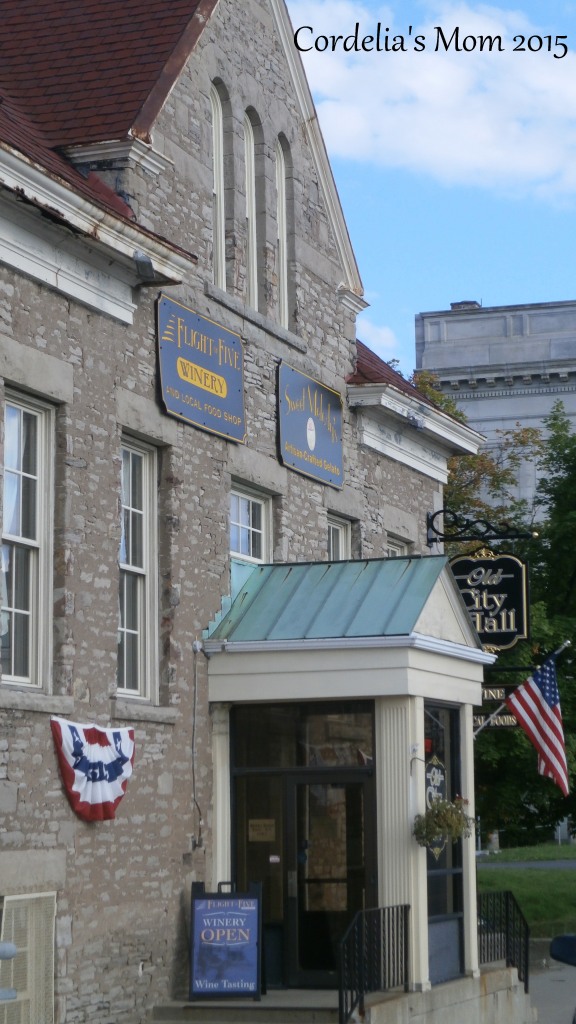 Since we started in Lockport, I wanted to end in Lockport because I knew the route home without maps.

Flight of Five is right on the Erie Canal, just a minute or two from the Niagara County Clerk’s Office. I’m glad we decided not to cross it off our list – the shop is charming, and the young lady serving the wine was as cute as could be. She obviously loves her job – and she promised to check out my blog when I explained why Teddy Rosalie was sitting on her bar. 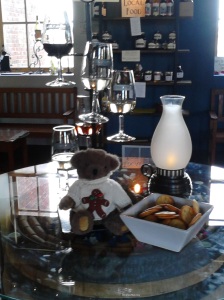 Flight of Five is true to its name – their wine tasting consists of 5 glasses, and you have a choice of a flight containing their signature wines, or a flight containing a mix of signature wines with those from other wineries. Since we had already visited those wineries, we opted for the signature flight. The wines are served in 5 different glasses, on a pretty little stand. This time, I abstained because I knew we had that drive home – although I did have a sip from each glass.

While my daughter was finishing her flight, I looked around at the other offerings. Lots of local merchandise – jellies/butters, art work, and goat’s milk products (including scented bar soap, which I just had to have).

And yes, I did manage to buy a bottle of wine there, as well.   While most of their wine names begin with the word “Lock” (hello, Erie Canal?), the one I liked was “Towpath.” 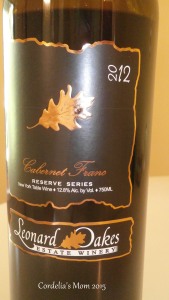 And finally, we were home. After taking Cody out for her walk, I completed my evening by opening a newly purchased bottle of wine– the Leonard Oakes Reserve Cabernet Franc (the most expensive of the wines I bought, and also the one with the highest alcohol content – not that it matters, hic!).

Excellent ending to a wonderful day!