It’s the crime of the century. An intensive investigation is ongoing. The following questions need to be answered:

Did the ball really go over the fence into CookieCakes’ yard?

Did CookieCakes abscond with the ball for nefarious purposes?

Whose ball was it anyway?

Did the kid playing so exuberantly with the ball maybe accidentally damage it and was afraid to tell his mommy, so he claimed it went into CookieCakes’ yard?

Summer has only just begun.  Already we have had flooding in my yard from the neighbor’s pool (“Hey, guys, let’s make a whirlpool!”)

At least once a day, something gets thrown into my yard by the next-door neighbor’s kid and his friends:  chocolate bars, chicken bones (“Hey, guys, when you’re done, just chuck it over the fence!”), and a toy football.  The first time the ball came over, it sat in our yard until we went out with Cody several hours later, at which point my husband threw it back over.

A day or so ago, the ball came over, and within minutes, Ho-Mommy was banging on my front door.  At which point, I refused to answer the door (really, they all know I don’t answer the door to anyone other than family, and they have been told that they are not welcome), and then I took Cody out into the yard to see what was going on.  I picked up the stupid ball and threw it back over – which wasn’t an easy thing to do considering the 6-foot privacy fence and the dense tree foliage.

We’d been wondering how that ball managed to come over at all, considering the fence and trees – and then I noticed that the pool ladder had been moved next to our fence so that the kids can climb up it and simply toss the ball into my yard, thereby having an excuse to then run to my front door and harass me.  Apparently, I’m supposed to station myself permanently in my back yard so that AS SOON AS that ball comes over, I can return it, ping-pong like.

Anyway, yesterday I was enjoying a quiet evening with just Cody as my girls had taken Dad out for an early Father’s Day dinner and movie.  At one point shortly after they left, there was knocking at my door and I saw a couple of kids on my porch.  I ignored them – they’ve tried to get into my house in the past, and I wouldn’t trust them not to say I opened the door, lured them in and then did something inappropriate.

When it was time for Cody to go out a  little later, I checked the yard and didn’t see any unusual objects of any kind.  She did her business, we came back in.  I went into the basement to do the laundry.

About half an hour later, I was sitting at my computer in the living room and Cody started barking.  I looked over and saw a FACE IN MY FRONT WINDOW!  I screamed, “That’s it, I’m calling the police!” and grabbed my phone.  I approached the window while dialing 911, still yelling, “I’m calling the police!”  At which point, I noticed the person peering in my window was wearing a uniform.

That’s right – the neighbor had called the cops because she thought her kid’s ball had come into my yard and hadn’t been returned. Now, isn’t THAT an excellent use of police resources?

The across-the-street neighbor claimed that he had come over and banged on my front door for 15 MINUTES and that I wouldn’t answer.  I heard nothing.  But then, at the time that allegedly happened, I was in the basement with both the washer and dryer running, and my hearing isn’t as good as it used to be.

Not his yard, not his kid, not his ball – why is he involved anyway?   Oh, wait – Ho-Mommy! Welcome to Peyton Place.

And – banging on someone’s door for 15 MINUTES?  This is a guy who’s frequently screaming at his kid, and was recently accused of beating his kid.  As a 63-year-old woman who’s home alone, should I open that door?  I didn’t even like talking with him from the other side of the gate, with two large police officers present.

Being the good citizen that I am, I unlocked the front gate and allowed the two police officers into my yard so they could see for themselves that there were no balls or other purloined toys in my yard.  I even let them use my very powerful outdoor flashlight. They asked if I had perhaps taken the ball into the house – now, why would I do that?  I don’t want ANYTHING that belongs to the next-door neighbor – hello, STD germs.

The officers went back out front, and I locked the gate behind them.

The last I saw and heard was one of the officers advising the neighbors to instruct their kids to be very, very careful in the future about stuff going over the fence. 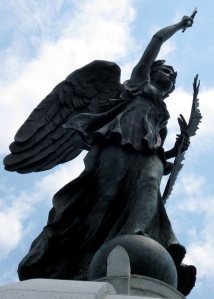 But I suspect this is not the end. In the words of the neighbor, ”Summer is just beginning.”  All I know is that if stuff suddenly starts coming over on an increased basis, I will be forced to file a suit for harassment.  At that point, I might also be forced to notify Social Services about the fact that Ho-Mommy goes off overnight and leaves the kids totally alone.  So far, I’ve been trying to stay out of that – but war has been declared.

And if I ever see that loony tunes father heading towards my front door, I will call 911 immediately.  Fortunately, in my town the police arrive within minutes.

As I said, war has been declared. And summer has just begun.

Images by Z Egloff, and Thomas Hawk, and John, respectively