Golden Earring’s “Twilight Zone”  was pounding loud on the stereo “It’s 2 am, the fear is gone…” as I crested the hill headed for Halifax. It was a full moon that was shining brightly in the bitter cold, clear February night sky at 2 am. The beat shaking the cab perfectly matched the center line dots as they sped past. Forty thousand pounds of pears from Medford, Oregon rested comfortably at 40 degrees F in the temperature controlled trailer (reefer) following closely behind  – happy in their ignorance of the -30 F external temperatures. 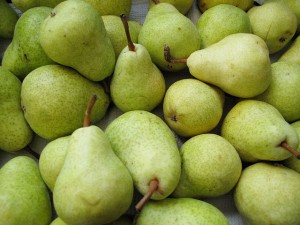 The road between St. John New Brunswick and Sussex New Brunswick, was 2 lane improved (wide paved shoulders with some controlled interchanges) with rolling hills and a 55 mph speed limit. It was lightly traveled this time of night, and consequently, there were few police cruisers as well. I could see the clearance lights of a tractor-trailer far ahead of me appear and disappear as we alternately crested hills and raced through valleys. Up, Down, Up, Down – it became monotonous after a while. Then his lights disappeared and the CB crackled with a voice that was unmistakably stressed and urgent:

“East bound! There’s a head-on collision here – the road is blocked with wreckage!”

He knew I was coming and must have seen my headlights in his mirrors. I could tell that he was the first to arrive at the potential slaughter in the middle of nowhere. Golden Earring was singing: “Yeah, there’s a storm on the loose, Sirens in my head” Two more hills and my headlights picked up the wreckage of a car spun around in the middle of the road. Steam came from under the hood and all the windows were shattered. Pieces of metal and car parts were strewn widely over the road. The other trucker had, mysteriously, gone past the wreckage and was sitting in the middle of the road about 200 feet further along. No other vehicles were in evidence – just the single demolished car. I pulled to a stop on the shoulder just before the wreckage, and yanking the parking brake knob, I turned on my four ways and flipped the switches that lit back up lights and the over head orange rotating emergency lights on the roof (I had these for hauling over sized loads but they were attention getters in situations where others needed to be warned). 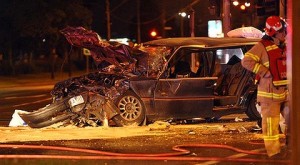 The engine hood was lying twisted on the road and the engine was sitting on the ground out of the frame, but still between the rails. The windshield was shattered and opaque; the driver’s side window was gone – just a frame with round bits of shatterproof glass adhering to the edges. Steam rolled up over the passenger compartment and it was hard to see. With a prayer, I shined the flash light onto the remains of the driver’s seat.

And there he sat, drunk almost to the point of unconsciousness, with just a small scratch on his temple (likely from the window shattering), holding the steering wheel firmly in both hands with his seat belt on. He turned to me with wide eyes and slurred: “What’d I hit?” This was a very good question, the answer to which was not obvious. I let out a deep whoosh when I realized I was holding my breath. God takes special care of small children, fools and drunks – for certain. I made sure he was OK, was the only one in the car, and I helped him out. The bitter cold air seemed to sober him up somewhat and he stood on the shoulder surveying the wreckage while he had a cigarette.

Concerned that there was obviously something large, likely another vehicle, somewhere here, I walked down the road towards the other truck that sat idling in the middle of the road, scanning for bodies as I went. Was it him who had hit the car? No, the truck was unmarked. How he had gotten through the wreckage though was a good question. Just past the idling truck I saw a large shape down in the deep ditch on my left. It slowly resolved itself into another tractor trailer sitting upright in a ditch so deep that its roof was level with the roadway. The clearance lights were still on and it was obvious once I got past the headlights of the truck on the road.  The driver was being helped up the steep embankment by the other driver. I met them as they stepped onto the shoulder and realized he was just shaken up and not hurt. I couldn’t believe it – the drunk in the car had hit a tractor trailer head on and was basically unhurt. I reassured them both that the car driver was fine – just plastered – and was having a smoke up the road.

While we were talking, a car came towards us and I waved it down with my flashlight. I spoke to the driver, explained that the road was blocked and asked him to drive back to the nearest gas station- about 10 miles- and call the police (there were no cell phones in vehicles at the time). After about ½ an hour, two New Brunswick Highway Patrol cruisers, an ambulance, and a fire truck came screaming up the road. The Federal Police had patrolled these roads until just recently when the government figured they could save a few bucks by establishing their own police force. They were a joke and constantly mishandled situations.

We all (except the drunk) met the two officers as they got out of their cars in front of the wreckage. One officer looked around and asked: “What did he hit?” I pointed out the tractor-trailer in the ditch and bit my tongue to keep from a snide remark – that 65 foot truck you just drove past. : “Oh”

We explained the drunk drive,r and the police wanted to know where he was – a good question. We had been joined by another trucker who had a full load of gasoline in a tanker, parked behind my truck. He turned around and gasped as he spied the drunk apparently trying to hide from the police under the tanker – and smoking another cigarette: “Get the fuck out of there you idiot! Are trying to blow us all up?!”

Realizing his hiding place had been discovered and the police were walking over, the drunk, in a burst of energy, took off running like a gazelle across the road, down over the bank and headed for an empty field that gleamed with a covering of snow in the bright moonlight. Other than the softy idling vehicles, it was very quiet and we all stood and watched him run, his footsteps crunching loudly in the frozen snow. Just as he reached the edge of the field, there was a loud “BOING” and to our amazement he flew backwards and slammed into the ground where he lay motionless. The tanker driver, who was a local, turned to the rest of us and said matter of factly: “Barbed wire fence”. I couldn’t stifle the giggles.

The police climbed down the slope and walked over to the drunk, who still lay unmoving. We could hear them talking to him as they helped him to his feet. The policemen were each holding an arm as they escorted him back up the bank. The drunk knew he was about to have a breathalyzer done and he figured the only way out was the ambulance. He began screaming and moaning very theatrically: “I’m hurt! I’m hurt! I’m hurt! Ohhh, it hurts so bad! – I have to go in the ambulance! Ohhh, it hurts!”

The police were very polite and quite obligingly lead him to the rear of the ambulance which sat with its doors open while they checked out the truck driver involved. Once they had loaded the drunk aboard and cleared the truck driver, the doors were closed and the ambulance began to pull away. I turned to one of the policemen and asked why they weren’t doing a breathalyzer test. He responded that a blood sample would be drawn in the ambulance – apparently it was standard practice when there was drinking with injuries involved. He said the paramedics would have to advise the drunk what they were about to do before drawing the sample.

No sooner were the words out of his mouth when the rear doors of the departing ambulance burst open and out flew the drunk.  The ambulance was going about 30 mph when the drunk, with his arms and legs wind milling, hit the ground and started to roll down the road. It was just like something out of a Bugs Bunny cartoon. I couldn’t help but burst into laughter. This guy may not have gotten hurt in a head on collision but he was going to kill himself before the night was over. The policemen walked towards the drunk’s prone body lying in the middle of the road where he had rolled to a stop. The ambulance braked hard, one of the Paramedics jumped out and began to guide the rig backwards towards the drunk. They didn’t even bother closing the doors. By the time they had all reached the drunk, he was sitting up dazed on the center line, looking somewhat tattered. It was too far away for us to overhear the conversation, but it was apparent that the drunk was not happy or obliging. As we watched, one officer put hand cuffs on the drunk, the two picked him up while he struggled and hoisted him into the ambulance. An officer climbed in with the drunk and we saw him handcuffing him to a wall as the doors closed yet again and the ambulance departed. By this time a wrecker and highway crew had showed up and they were moving the wreckage and sweeping the road enough for us to pass.

As I climbed back into the warmth if the truck, the stereo, on repeat, was playing:

“Help, I’m steppin’ into the Twilight Zone, Place is a madhouse…”