Taking Back the Neighborhood (If Necessary) 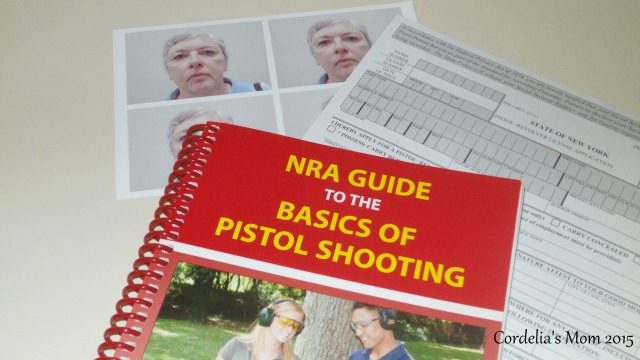 We have a gun in the house. My husband did security for many years, both as a guard and as an instructor, and his job required that he have a pistol.

I’ve never had much interest in seeing, touching or using that pistol, so it’s been kept locked up when not being carried on the job or used for target practice. But after my recent encounters with my loony neighbor, I came to realize that if ever I had to use that gun, I would be more likely to shoot myself in the foot, or to shoot Cody, than to shoot an intruder. If there’s a gun in the house, all the responsible adults in the house should know how to handle it.

For that reason only, I recently took the New York State Pistol Permit Course. It was run by a local gun store on a Saturday morning, from 9:00 to noon.

I got to the store about 10 minutes early, and the doors weren’t open yet, so I sat in my vehicle watching the other students arrive. I tried to guess why they were there. A couple of young men were obviously either hunters or going into law enforcement – I was OK with that.

Then a young couple arrived – a rather tough looking blond girl and her unfriendly looking boyfriend. They strolled up to the locked doors and became visibly annoyed, after which they walked to the nearest vehicle and had a short, terse conversation with the driver.   The thought occurred to me that perhaps such impatient people were not the best candidates for pistol ownership.

But then, what do I know? Perhaps a wimpy 63-year-old woman is also not a great candidate. As it turned out the aforementioned couple apparently had simply discovered that their formerly safe neighborhood was gradually changing. Sound familiar?

Next came a pretty, very normal looking young woman who reminded me of my own daughters and a 20-something bleach blond lady. I began to wonder if I was going to be the only senior citizen taking the course.

The doors opened, and everyone filed in. At the end of the line were a couple of middle-aged women who looked as uncomfortable as I felt.   When the classroom door closed, there were 14 students of both sexes, a variety of skin colors, and various ages.

Photos were taken, everyone signed the enrollment sheet, and the class began. The instructor was a very competent and knowledgeable man who had retired from federal service in which he had been the range master for some agency or other. He taught the course with common sense and humor, and extreme patience when certain students (other than me) simply could not get the hang of such concepts as dominant eye, support hand, and muzzle discipline. 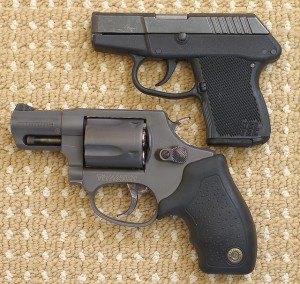 The highlights for me were being able to handle a semi-automatic pistol (unloaded, of course) and dry-firing a .38 revolver. No actual range time was included – that will come after the pistol permit application has been submitted and approved. I found that a little disappointing – the whole point of taking the course was to learn how to handle a pistol properly!

However, I know I must have done a really good job of interacting during the class, because at the very end, the instructor looked pointedly at me and asked, “Who ARE you?!”

Am I ready to take on the world? Not yet. But we got good instruction on the basics of firearms safety and on how to fill out the permit application so it won’t be rejected. The instructor indicated that there has been a movement lately to make it easier for women to get concealed carry permits, probably due to the increase in violence against women. Not that I want to be a pistol packing mama, but I guess having the legal ability to carry a gun should it become necessary would not be a bad thing to have.

Plus, my loony neighbor, who thinks he’s a cop, might think twice about trying to break my door down if he learns I not only have a gun but know how to use it. That knowledge alone might prevent a bad situation from becoming lethal. Not having to pull a gun at all is so much better than having to use it under extreme circumstances.

Next steps: get fingerprinted and submit the completed application to the County (which must be done in person), and then get some range time (either with my husband’s pistol or with one I will buy that will fit my smaller hand) – finally, an activity that my husband and I can both enjoy!.

Stay tuned – there will be future posts as I go through the process of legally owning and safely using a firearm. Hopefully, the process will not include shooting myself in the foot.

41 Responses to Taking Back the Neighborhood (If Necessary)