The Day I Left My Husband

The following was originally posted on Cordelia Calls It Quits and is reprinted here with Kelly Gurnett’s permission.  I thought my new readers might enjoy it as much as those did who read it last year:

THE DAY I LEFT MY HUSBAND

Let me preface this post by saying that my husband and I have been together for more than 30 years and are closer now than ever. We have literally been through “for richer, for poorer, in sickness and in health.” My heart still skips a beat whenever he walks into a room unexpectedly.  (Although if anyone tells him I said that, I will track that person down and yank out his or her tongue—there is enough male ego in my house already!).

But every marriage has its rough spots.

This is a story about one of ours, and what I came to learn from it.

Three young children, two busy jobs, working different shifts so as to avoid daycare…My in-laws (especially my mother-in-law) helped out during that crucial period between shifts when neither of us could watch the kids. Things were tight financially, but we were getting by. In fact, I had recently managed to buy my very own car in my very own name, thereby giving me an independence I never had before. I was making the bulk of the money, working 40+ hours a week as a legal secretary in a large law firm downtown.

I would come home exhausted and cranky. My kids had spent the day with either Dad or Grandma, both of whom they LOVED and both of whom (in my own mind) were much better at parenting than I was. I began to wonder how I ever got into this life (heck, I didn’t even like kids, at least not other peoples’ kids). My husband and I were going through a tough period, with lots of sniping and bickering (probably mostly my fault, in hindsight).

It didn’t help that Grandma would come to our house and clean it from top to bottom, sometimes even doing things like cleaning the baseboards behind the furniture. I felt like a piss-poor homemaker as well as a piss-poor mother. (It was years later that I finally realized Grandma was doing all that not to show me how bad my housekeeping was, but because she had herself been a divorced mother raising three kids and truly understood how hard it was. She was trying to help me out!) 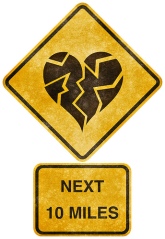 Somehow we usually managed to keep our fights under control until after the kids were in bed, which made for some late evenings. This particular night, I had finally had ENOUGH. I didn’t need him, I didn’t need those three ungrateful brats (apologies, girls; of course I didn’t mean it), and I sure as hell did not need my husband’s mother interfering in my life. And I had my very own car in my very own name, so I didn’t HAVE to stay!

So off I went.

I had no extra money and no credit cards, so I couldn’t go to a motel. My thought was that I would drive into my downtown office, where one of the partners had a couch. I would snooze on the couch until morning, get up before anyone else arrived, work a normal day, and then decide what I was going to do with my new freedom and my new life.

Even though I had grown up in Western New York, my winter driving skills were not 100%. (Did I mention that this was my very first car in my very own name?) While my suburb did a great job at snow removal, the city was a different story. Crossing the city line, I began to slip and slide a little, but I was DETERMINED.

I entered the infamous “S” curves—a twisty, bendy series of road that’s risky even in the best weather. There wasn’t a plow in sight, snow was accumulating on the roadway, and visibility was limited to the path cut by my own low-beam headlights (at least I knew enough not to use high beams in a snowstorm). My car skidded and did a 360° (no ABS or traction control back then). Fortunately, in the wee hours of the morning on a weeknight, no one else was silly enough to be heading into the city in a snow storm.

I got control, got through the curves, and pulled into the first parking lot I saw (just happened to be a liquor store—probably shoulda just stayed there for the night!). I sat, waiting for my nerves to calm and mulling over my situation.

So, which way do I go: forward or back? Totally new life, or repair the old life?

Thoughts flashed through my mind:

I almost DIED back there! My kids are little still and need their mommy. Is my husband really the right person to explain menstruation to three young females? I think not.

Just about then, a plow made its way past the parking lot, heading north to my suburb. (Trying to tell me something there, God?) I pulled out and followed the plow back through the “S” curves and back to the ’burbs.

We didn’t have cell phones then, so I pulled into another parking lot where there was a pay phone (anyone else remember those?). The conversation went something like this:

ME: I’m heading home. I’ll be there in a few minutes.

HIM: I’m not sure want you to come home

HIM: After you left, I called my mother.

HIM: She says I’m better off without you.

HIM: But then I called YOUR mother.

HIM: She laughed and said you’re probably just blowing off steam. And she’ll call me if you turn up at her house.

Silence, while we both think about all of this. Finally:

After making up that night, we never discussed The Incident. While we still had the usual marital spats, they no longer had the same sting. We both knew that if the situation ever got beyond our control, one of us might actually leave! And neither of us wanted that.

Our fights became spats, spats became disputes, disputes eventually became discussions. Sure, even after 30 years, we still occasionally snipe at each other, but it’s half-hearted, usually accompanied by one of those sly “gotcha” smiles, and almost always short-term.

If there’s a lesson to be learned from this story, it is this: Relationships are hard! Whether they’re with spouses, children, in-laws, relatives, friends, coworkers, neighbors (did I leave anyone out?), you can never really know another person’s mind, and your view of another person is always colored by that secret place in your own mind that you tell no one else about.

All you can do is try your best to understand where someone else is coming from.

And talking things out is VITAL. So many times I have made a judgment call about another person, only to find out after talking to that person that he or she is not really all that different from me.

Yes, relationships need work if they are going to last—and relationships with loved ones often need more work than most. But, what I learned that snowy November night was that when all is said and done, it’s worth it.

Happy Valentine’s Day, everyone! If you have a significant other, give him or her a hug from me.

2 Responses to The Day I Left My Husband