If A Tree Falls at Work …

(The above photo has absolutely nothing to do with this post.  I just happen to like it.)

One of the bosses was out of town, and the other was out for the morning.  Our computer system and internet were down.  No phones were ringing.  Filing had been completed.  There was nothing left to do.

I decided to nuke a cup of coffee, and while the microwave was doing its thing, I glanced out the window at my favorite dead tree.  I had been meaning to bring in my good camera to photograph that tree because of the way the uppermost limbs seemed to reach toward something beyond the clouds.

As I ruminated, a huge tree service truck pulled up, and several men got out and approached MY tree.  Were they merely going to trim the  branches?  No, there were going to TAKE IT DOWN!

Say what?  Another photo opportunity missed.

First, the smaller limbs must go:

I wouldn’t want to be the guy in that cherry-picker bucket, but he seemed to be enjoying himself.

Working the way up the tree:

Better check with the guys below to make sure there’s no traffic or pedestrians – after all this is a city street during a busy work day: 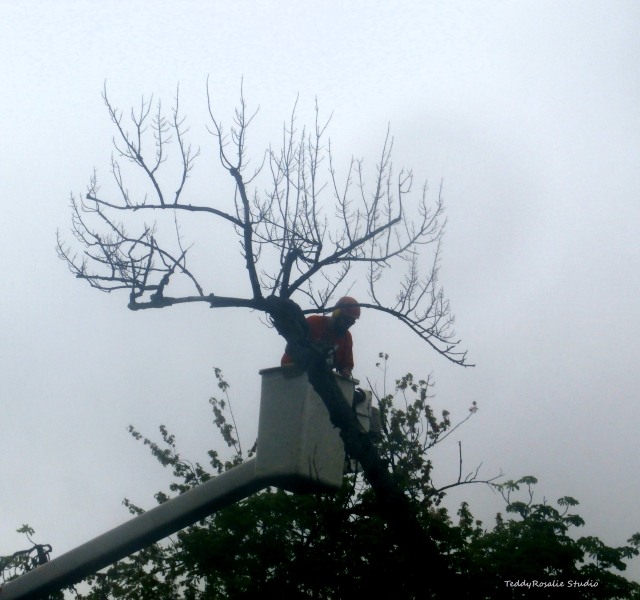 OK, it’s safe to throw the branches down:

Branches off, top third has been removed.  (The photo was too blurry to use, and I didn’t want to be that nosy old biddy running outside with her camera.)

Now, it’s time to take down the trunk of the tree.  Sawing from the bottom?  Really?  Yikes!

The other workers don’t seemed concerned as they put the rope on while the trunk is still being sawed: 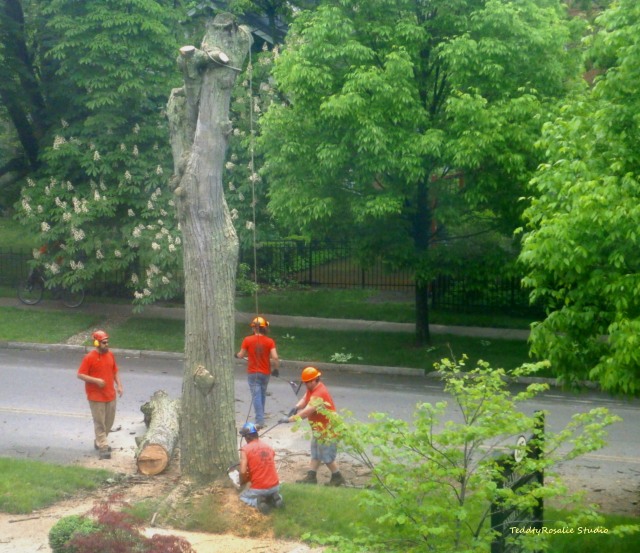 Two guys went to either end of the work area to stop traffic temporarily, and thankfully the little kids at the daycare center across the street had moved away from the fence.

And finally – THERE SHE GOES!

(Check out the motion marks as the trunk falls to the street.  If you look carefully, you can see the tree hasn’t actually hit the ground yet.)

Thus ended the last day of my work week.  Turned out to be not so boring after all.

16 Responses to If A Tree Falls at Work …