Yes, the fenced in yard is wonderful, but there are drawbacks.

In order to make room for the new fence, we had to clear the brush and overhanging tree limbs, and for the sake of expediency, we threw that stuff next to the garage pending removal on trash day.  Of course, we then forgot to actually take it out on trash day.

Subsequently, we noticed a couple of large bunnies going in and out of the brush pile, and they were driving Puppy Cody nuts.  So, today hubby went out and bound up the branches and moved them elsewhere, determined that they will go out to the curb next week (hopefully).

When the brush pile was removed, we discovered a bunny nest underneath.  Guess we should have thought of that – after all, two large bunnies playing around the yard?

Enter Puppy Cody.  Took her all of 30 seconds to find that nest before we could get to it – and she grabbed the uppermost baby bunny and took off.  Yes, she proceeded to eat the poor baby before we could get to her.  Hopefully, it won’t make her sick.  I just keep reminding myself that it’s merely meat, and dogs are used to eating meat.

The other babies are, as far as I know, still in the nest – which we covered with a large heavy plastic pan to keep Cody away from it.  The pan is rectangular and has raised areas at each end, which should allow the adult bunnies to get to their babies.

If the adult bunnies come back.  I hope they do.  One dead baby bunny is upsetting enough.

Poor Cody is frustrated that I won’t let her out to do some more hunting.  I can’t blame her for acting like the dog that she is, but that doesn’t mean I have to like that part of her personality.

Poor hubby had to pick up the dead baby bunny.  Not much of a Father’s Day for him, I’m afraid.

So, enough sadness for today.

What is this flower?

A couple of weeks ago, I asked my readers to identify a flower that’s growing on a bush in my front yard (see photo above).  No one was able to give a definitive answer.  The best we all could do is decide that it’s some kind of dwarf honeysuckle or mini-hydrangea.  Since it smells like honeysuckle, I’m going with that. 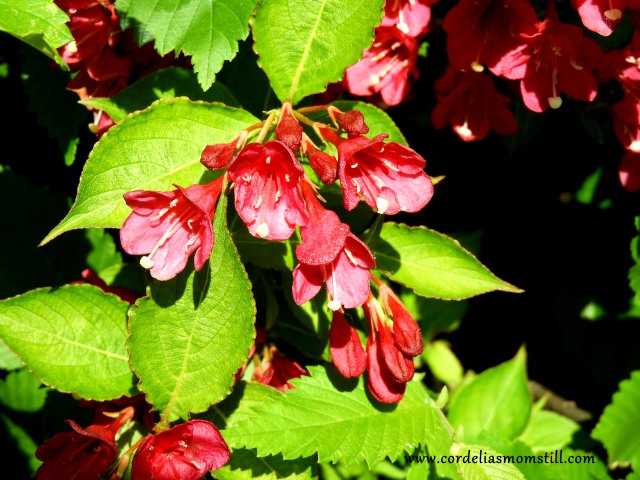 What is this flower?

Now you all have a chance to identify a different flower.  What is the pretty red flower pictured above?  It also grows on a bush and has no scent.

And, since we’re playing “What Is It?“, you get extra points if you can identify the make and model of the new car my daughter bought yesterday.  See the photo below.  Hint:  She bought one of the blue ones.

Enough for today.  For those who are grilling in honor of Dad, have a hot dog or hamburger for me.  We’ve had our share of excitement and are staying in for the rest of the day, except that I will go out this evening and water the flowers in front, including the one below (which I bought, and which was tagged with its identifying information, yay!).

35 Responses to The Huntress Returns