And Then The Rooster Crowed 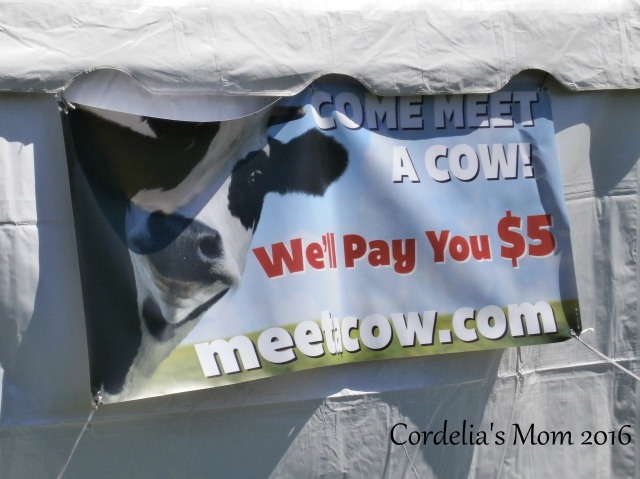 On my way to work, I was sitting in traffic behind a Metrobus, on the back of which was an ad stating, “Meet a cow. We’ll pay you $5.00.”  For more information, refer to  www.meetacow.com .

Well, that certainly woke me up. Being a greedy little worker bee, as soon as I got to the office (and when the boss wasn’t looking), I went onto the website.  Sure enough, there was a photo of Albert the Cow (well, technically, a bull since he’s male), with a link to watch a video of Albert playing with a ball in his yard at the ASHA Sanctuary in Newfane, NY.  Can you resist a video of a young bull playing with a ball?  I sure can’t.

Plus, they would serve free ice cream sundaes! I immediately registered for their next event, to be held on Sunday, April 17. 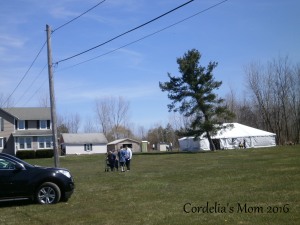 On the day, I picked up Cordelia, and we drove about 40 minutes to the sanctuary. I was a little surprised that the location appeared to be a simple farm.

(Note to ASHA Sanctuary personnel – maybe one of your volunteers with artistic talent could make you a sign for the beginning of your driveway? We went past it, before realizing the tent and all those cars meant we had found the right place.)

WAITING FOR THE VIDEO

Naturally, we expected to be shown an anti-animal abuse video because the purpose of ASHA Sanctuary is the rescue of abused farm animals, and Albert had been rescued as a newborn calf from a dairy farm. However, the video, although upsetting, was not as bad as it could have been, and was only about 10 minutes long.

Then we got to meet the animals. 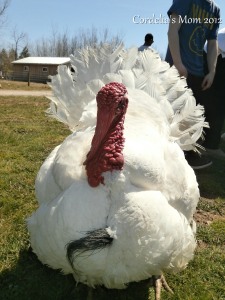 First were the turkeys and chickens. Throughout the entire event, the male turkey strutted around preening – he obviously loved getting attention from all those people. Even the chickens came up to be petted.  I had never petted a turkey or a chicken before – my only experience around fowl was being chased by a swoose (half swan/half goose) on a farm as a child.  That swoose was one mean bird!

The rooster stayed in his coop since he was a little shy of people – but he did crow on cue when it was mentioned that this is mating season.

LOOK AT THAT SMILE!

After meeting the feathered friends and learning a little about their care, we all walked over to the area containing the four-footed animals. First we met The Pig (whose name I don’t recall).  I was able to get a photo of him, but unfortunately I’m not limber enough to crouch into his hut to pet him.  Cordelia did, and The Pig actually smiled at being petted. 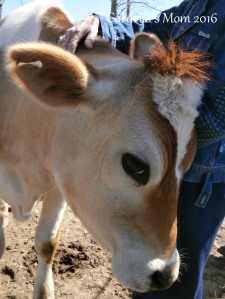 Next, small groups were shown into the fenced yard area, where we met two sheep, a goat, two donkeys – and Albert the Cow. Albert was obviously feeling a little tired after being petted all morning, but still managed to show his sweet, loving personality.  I swear when I whispered in his ear, he was about to give me a kiss, until he got distracted by another visitor.  He did love to pose for the camera. 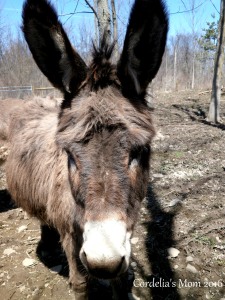 Dawn the Donkey was a sneaky little lady. She stood quietly awaiting her turn, so I walked over and scratched her forehead and ears.  Then I went back to the main group surrounding Albert.  As I watched, Dawn slowly – ever so slow – began creeping up behind everyone until she finally managed to poke her nose between two visitors to let everyone know she was not to be ignored.

Even the goat eventually came over to the petted. I admit I got just a little nervous when sanctuary personnel commented that the goat “used to head butt a lot but doesn’t do that too often now.”  Those horns were really solid and looked like they could hurt!  But the goat was just as loving as all the other animals.

Finally, it was ice cream time! As we headed back to the tent, I learned that it was non-dairy ice cream, made with almond milk. I have nothing against vegan ice cream, but almond is one of my colitis triggers, so I had to forego my treat.

RESTING AFTER A JOB WELL DONE

At the end of the event, everyone was given their $5 bill – as far as I could tell, every single person then put that $5 into the donation jar.

Next on the agenda was dinner at Gordie Harper’s (I was last there on that mini-wine tour). Being unsure of the Newfane area, I Mapquested our route.  The first turn was onto Jacques Road – we went right past it.  Not only was it unmarked, it was also unpaved (WTF?).  But I’m a brave soul with an all-wheel drive SUV, so we took the chance.   Lots of dust and potholes, but we did get to Gordie Harper’s.

After a nice meal and a short browse through the boutique, it was time to head home. All in all, a very nice way to spend a beautiful Sunday afternoon.

23 Responses to And Then The Rooster Crowed