I received compliments on my post awhile back about my life as a real estate paralegal, so I figured now would be a good time to relay a few more of my experiences:

THEY WON’T LET ME LEAVE

I’ve never really understood why sellers schedule the sale of their existing home at the same time as the purchase of their new home, thereby forcing them to do everything in one day.  I understand that some people have to do that due to financial circumstances, but it is never, ever easy.

I once got a call from a client the morning of closing, indicating that she was trying to get her stuff out, but that the buyers’ movers had already arrived and were blocking her driveway.  I told her to just ask them to move the truck.  She indicated she had done that and the movers refused, saying their customers (the buyers) insisted they unload NOW (even though the deal wasn’t actually closed yet!).

My client also indicated that she was afraid of the buyers  because “He is a cop, has a temper, and carries a gun.”

Eventually, I convinced my client to put the mover on the phone with me, and I told the mover that he had to back out or he wouldn’t be able to unload at all, and therefore wouldn’t get paid.  I told him not to unload ANYTHING until he got a call confirming that the sale had closed.  Somehow it worked out and we got the deal closed, and everyone moved  into the houses they were trying to get into. 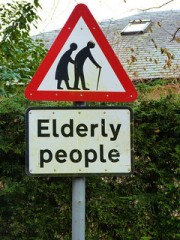 My clients were an elderly couple who were closing on one of those “reverse mortgages.”  They were the sweetest couple ever.

Closing was to take place at the County Clerk’s  Office downtown, and my clients did not want to brave the city traffic, so they came to my office and I drove them to the closing.  I parked in the nearest city ramp, and when we were all out of the car, I turned to my clients and informed them that we would have to go through a metal detector.  Speaking directly to the husband, I told him that if, like many men, he had a pocket knife, he might want to leave that in the trunk of my car.

Whereupon, the sweet little old lady opened her purse and pulled out a humungous hunting knife á la Crocodile Dundee (“That’s not a knife – this is a knife!” [sic]).

My jaw must have dropped nearly to my toes.  My client explained that she used to own a store in a not very nice section of the city and had grown accustomed to carrying a knife in the event that she would have to protect herself.

The knife was deposited in the trunk of my car, and we went on our merry way.

But I made sure to never, ever tick off THAT sweet little old lady!

YOU WANT ME TO DO WHAT?

And then there was the time, early in my career, when my boss had a back injury just before the assessment review hearing FOR OUR OFFICE BUILDING.

Now, my boss is the type who never lets illness or injury stop him from working, so I knew he was feeling poorly when he told me that I would have to cover the hearing.  Not – could I drive him downtown so he could do it.  Oh, no – my, myself and I were in charge of making sure our building was re-assessed at a lower value than it currently carried.

No pressure there, right?  I was a fairly new employee, still unsure of her standing in the firm and unsure of my employer’s faith in my abilities.  And  God knew, I was totally unqualified (at least in my opinion) to handle that type of situation.

Was this some kind of test?

I  drove myself downtown as slowly as possible, hoping I might miss that darn hearing.  Upon arrival (on time, wouldn’t you know it), I embarrassed myself by not knowing the names or titles of the gentlemen running the hearing (and whose opinions would ultimately decide my fate my office building’s tax assessment).

Questions were asked, and I answered as best I could.  It became more and more apparent that I really had no business being there.

Finally, the older gentleman in charge chuckled and told me my firm’s request for a re-assessment was … GRANTED.   (My heart rate thereupon returned almost to normal.) And he added to please give his regards to my boss, whom he knew very well.

Whew!  Do you have any idea how angry my fellow co-workers would have been had I failed and they were denied year-end bonuses because the taxes on the building were too high to allow for bonuses?

Guess I must have done all right ‘cause 15 years later, I’m still in the same job.   Fortunately, I have never since been asked to cover a hearing of that type, although now I could do it without suffering heart palpitations.

Images by:  John/MTSOfan, and Duncan Brown (Cradlehall), and One Way Stock, respectively.