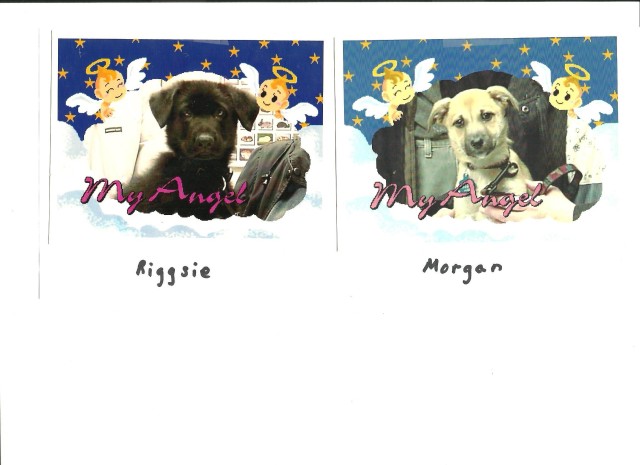 RIGGSIE AND MORGAN AS PUPPIES

In the last year, we have lost many animals from old-age-related issues.  I once had four tanks of gerbils (started with two individual gerbils which were supposed to be different sexes, but then had to separate the resulting boys and girls) – they all died of old age.  Ok, gerbils don’t stimulate sympathy in most people, but I was still sad when each one passed.  God bless the little things, each one made it to about 3-1/2 years or more, which is pretty amazing for such small animals.

Granted animals are not people, and perhaps grief should be retained for humans only.  Heaven knows, we all grieved when our Dan died of cancer last year, and my mother died of old age shortly thereafter.

But somehow, losing our black German Shepherd, Riggsie, just made the grief so much more unbearable.  Riggsie lived to be 12 years old, and then succumbed to bloat (gastric volvulus).  Sure, surgery might have been an option, but the emergency room vet could not guarantee an elderly dog would survive the anesthesia and surgery, especially since poor Riggsie had immunodeficiency problems.  The dog was in agony.  The decision was made.

We went home from the emergency clinic without our Riggsie.

That was one year and 10 days ago.  In the last year, we still had our smaller, mixed border collie/shepherd, Morgan.  Morgan turned 13 last November.

Morgan enjoyed having the house all to herself without her “big brother.”   She “stole” all his toys, one of which was even bigger than she was!  She began snoozing next to my feet while I was working on the computer – Riggsie was the alpha dog and previously that was HIS spot, along with first dibs on the couch.

Just before Christmas of this year, Morgan developed a cough which wouldn’t go away.  We took her to our regular vet, thinking it was an allergy or something.  Sure, we had all noticed she had lost weight over the last few months, but just figured it was old age catching up with her.  Or perhaps it was her previous neurological problems reasserting themselves.  The vet examined her and took blood work – diagnosis:  Stage 3 canine lymphoma.

Without treatment, the prognosis was four to six weeks.  On prednisone only, she would have maybe two months.  If we opted for chemotherapy, we could stretch that to maybe six months.

The dog was over 13 years old and was already having trouble breathing.  Chemotherapy is expensive, tough on the dog, might not work for such an old dog, and even if it did work would only extend her life by a few months at most.  We opted for the prednisone therapy.

The day before yesterday, despite increased doses of prednisone, Morgan began gasping at night, and the fear in her eyes did me in.

Yesterday, when Morgan woke up, she seemed perfectly OK again – almost like she thought she was a puppy.  But I remembered her eyes the night before, and knew she was declining rapidly.

I called our vet to ask how I could know when it was “time.”  I truly expected the vet to tell me to bring the dog in for an exam.  But instead the vet explained to me just how aggressive Morgan’s lymphoma was and that things would likely be getting ugly very quickly.  She left it to my husband and me to determine if we wanted to try to keep Morgan around for another week or two, with the very real possibility that she would soon be in dire distress, or put her down gently now, before the real suffering began.

I made the appointment– the last appointment of the day, and the vet said she would wait for us to get there.

Although showing signs of her disease at the vet’s office, Morgan was still acting fairly peppy and friendly.  My husband and I developed enough doubts that the 5:00 pm appointment became 6:00 pm and required another conversation with the vet prior to the ultimate decision.  The vet reassured us that easing Morgan’s current suffering and preventing even worse future suffering was the right thing to do.

We came home without our Morgan.

I’m sure we did the right thing in preventing further suffering – the situation was hopeless.  But I still feel guilty.

And now we are dog-less.

But it still hurts.

We’ll get past this grief like we have before, for both people and animals.

We may eventually get more pets, or we may not – that decision will wait until we’ve had time to process the current situation.

And don’t anyone dare to tell me to get over it already – it’s just an animal.

ADDENDUM:  As it turned out, I couldn’t stand living without a dog in the house.  Thus began the story of Puppy Cody.

figuring out life one hobby at a time

Book reviews and other news from nowhere in particular

An Archive of Curious Facts for the Curious