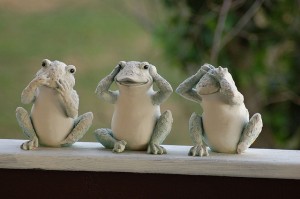 So few of us are able to keep our mouths, ears and eyes shut at times.

Blurting out exclamations and/or proclamations during stressful encounters can be especially embarrassing, traumatizing and/or downright dangerous.

“If Grandma ever does that again, I’ll kill her.”

My mother-in-law watched my kids while I worked, and often helped me out with household chores.  Sometimes things didn’t get put back quite the way I wanted them.  My husband was working armed security and had a pistol permit.  The day after I blurted out this threat, my young daughter dragged Grandma up to the master bedroom, pointed to where the gun was stored (how she knew is beyond me), and told Grandma I was going to shoot her.  Use your imagination as to how this went over with Grandma, and how long it took for the whole thing to eventually blow over.

“I could just kill you!”

[Is there a pattern here?]

I can’t recall what my very young daughter had done to make me say that.  But as a young mother, I always made sure to carry through on promises to my kids.  Needless to say, this “promise” was taken literally.  Thank God, “kids are resilient” (in the unforgettable words of John Candy, playing the polka guy in the movie, Home Alone).

“I hope you drive off the road and kill yourself.”

My husband and I had an argument as we were preparing for our annual trip to bring my daughter back from college, and I muttered this under my breath just as we were leaving the driveway.  Said daughter had loads of stuff, and we only had sedans, not trucks, so we were taking two cars.  My husband drove in the lead, and being a good little wifey, I followed.  About an hour out of Buffalo, my husband reached for a snack in the back seat of his car (while going 70 mph), miscalculated, and veered toward the edge of the Thruway, actually crossing the rumble strip.  Two thoughts immediately ran through my mind:  “Oh, God, why did I say that?”  and “How am I going to explain this to the insurance company?”

“I’m really hard on my hands.”

I was 26 years old, and the company I worked for had a softball team on which I played.  The very day I made this comment to a co-worker, we had a game wherein I somehow tried to catch the ball in my non-gloved right hand, breaking the fourth finger on that hand.  In fact, the finger was hit with such force that the knuckle disintegrated.  I knew it was really bad when I heard the x-ray tech exclaim, “Wow, look at that!”

“Sure, I can handle any computer system you have.”

This statement was made during a job interview, for a job I really, really wanted.  The interviewer took me literally – sat me at the computer in her office, and gave me a project.  It took me a really long time to figure out how to even turn the darn thing on (this was way back when computers were still using the DOS system with a C: prompt).  Eventually, I managed to complete the short project.  All turned out OK – the interviewer was impressed by my ability to work through my fear, and I was hired on the spot.

While trying on intimate apparel, I heard this from the next fitting room:  “Well, I don’t know what size I take any more because things aren’t where they used to be.”

After the neighbor’s kid ran into the street and almost got hit by a car, I heard said neighbor shout out  her window:  “If I ever see you do that again, I won’t let you play in the street any more!”

The day after the above incident, the neighbor’s kid and several of his friends were playing in the neighbor’s car, which was parked on the street during very warm weather.  The young mother from across the street went to said car and I overheard:  “If you’re going to play in the car, at least roll the windows down.  And you know not to play in the trunk, right? …. Right?”  [and where is little Johnny, anyway?].

AND, OF COURSE, THERE ARE THINGS I’VE SEEN AND WISHED I HADN’T

My 46-year-old neighbor (who thinks she’s 16) sunning herself in her string bikini.

All the fire trucks and other emergency vehicles with lights on parked in front of said neighbor’s house after she called 911 because …………………………………………… her smoke alarm needed a battery [I kid you not].

The photoshopped picture of shirtless John Hamm wearing Rihanna’s sparkly transparent dress, which was published in  I Am Begging My Mother Not to Read This Blog.

How about you, folks?  Want to share similar incidents you’ve experienced?  Just leave a comment below so all the world (or at least all 10 or so of my readers) will know that you, too, are a faulty human being, just like Cordelia’s Mom.