Office Dynamics (That’s All She Wrote) 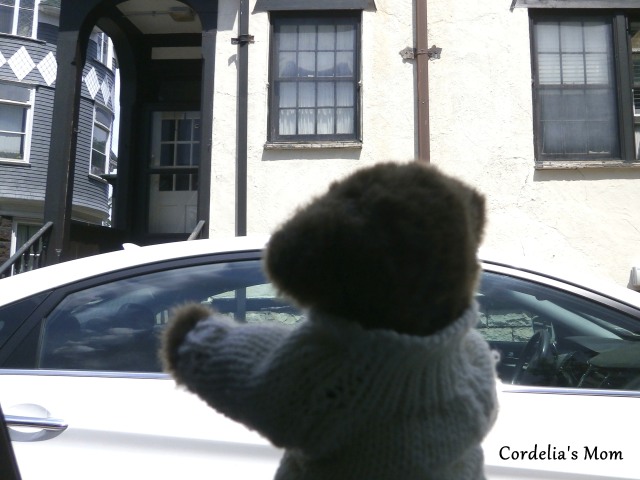 TEDDY ROSALIE WAVES GOODBYE. TOO BAD SHE DOESN’T HAVE FINGERS.

My job of 17-1/2 years has ended. My personal effects have been boxed up and put into storage.

Goodbyes have been said to those that matter, and instructions have been relayed that I will never again answer a call from that office, so don’t bother.

Yes, it’s bitter-sweet. I loved my office with all the windows and a door I could close.  The boss, although oftentimes difficult, was good to me when it counted over the years – accommodating the constraints caused by my illness, allowing me to drop down to 4 days a week, letting me take long lunch hours, and even backing me up when I made a mistake that cost the firm hundreds of dollars.

And I certainly won’t miss the grief.

Yesterday, I met with that first attorney I had contacted upon notification of my imminent unemployment (refresh your memory, here).

On the way to that interview, my phone rang and I picked up through the SYNC feature of my car. It was an attorney referred to me by a friend and who was considering adding a paralegal position.   She indicated that her firm was definitely interested in speaking with me, but that the hiring person was out of town until next week.  Would it be ok if they called on Monday or Tuesday?

Sure, why not. That firm is downtown, meaning no free parking and annoying traffic, but big downtown firms tend to pay more – simply because no one wants to work downtown these days.

Meanwhile, I had reached my destination. I pretty much knew I had this job if I wanted it and this interview was to get the nitty gritty out of the way, but still I was nervous.  Only one more day to joblessness, and nothing else on the horizon!  This was a small[er] firm in the suburbs, and the likelihood of getting a salary I could live on was negligible.

But this attorney (let’s call her Attorney A, to keep in line with the prior posts, and I apologize for having to start all over at the beginning of the alphabet) had become a business friend over the past several months, so I was hopeful. In fact, it was this attorney I had turned to for advice about the previous interviews I had gone on.

In short, we discussed job duties, hours, and work week. I would have to go back to 5 days a week, but accommodations would be made for my IV therapy days and for doctors’ appointments and such.  With the office being only about 15 minutes away, I could still go home at lunch time.  Two part-time positions were being combined into one full-time position just for me.  The medical insurance would be paid for in full by Attorney A as part of the salary package.

Ah, but, what about the salary?

Attorney A took a notepad and pen and wrote down a number. I held my breath, prepared to counter-offer.  As she passed the notepad to me, she stated, “This is the best I can do, and I’m doing it because you’re you – there will no other offer.”

While going through the job hunt, I had, of course, sat down and calculated my salary requirements. I had a figure in mind below which I could not go and still be able to meet all my bills.  Most firms were offering below that amount, no matter how much experience I had.

Still, unemployment would be even lower.

I took a breath and prepared to just suck it up, take whatever was offered, and figure out a way to juggle. I needed a job.  My current job was ending!  I didn’t want to be sitting home unemployed.

The figure written on the paper was halfway between my current salary and what I had determined was my minimal salary requirement. Insurance would be paid on top of that.  The pay would be enough to meet my monthly expenses without touching the savings that I’ve worked so hard to accumulate.

While my inclination was to jump up on the conference room table and start dancing, I forced myself to say that I would need the weekend to “crunch the numbers” and get back to her on Monday.

At which point, she invited two of her employees in “because they wanted to meet you in person.” These were other paralegals I knew by voice only, having worked with them on numerous deals between our offices.

They came in, introduced themselves, and hugged me.

Hugs count. The decision was made.

I asked Attorney A for just a few more minutes of her time, and after the paralegals left the conference room, I told Attorney A that I had decided.

I start work on August 15. I will have two weeks between jobs to do whatever I wish, and I suspect I will spend most of it just sleeping and playing with Puppy Cody.

Life is good. Networking works! And apparently, God is kind even to those of us who are completely non-religious.

Thank you to all my readers who suffered through this ordeal with me. Your support means more to me than you will ever know.

49 Responses to Office Dynamics (That’s All She Wrote)