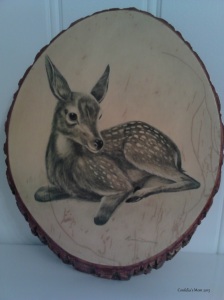 Print by Ruane Manning – see note at bottom of post

The scream reverberating from the next room at Big Meadows Lodge woke me from a sound sleep. Somehow I just knew that my then husband had something to do with that scream.

No, he was not a philanderer, but he was an alcoholic.

We were on Skyline Drive in Shenandoah National Park in Virginia to celebrate our first wedding anniversary. After a day of hiking, we had cleaned up and had a romantic dinner in the Lodge’s restaurant, gazing out the plate glass windows at the Blue Ridge Mountains. Returning to our room, my ex-to-be gave me a quick kiss and then returned to the Lodge’s bar to “pick up something for later.”   I changed into my newly purchased peek-a-boo negligee (hey, I was only 20 years old!). When he hadn’t returned several hours later, I realized he had continued our celebration, solo, so I went to bed, solo.

At some point after becoming sloppy drunk, ex-to-be attempted to return to our room, but got confused and somehow managed to get into the room next door. (Why was that door not locked?!) He thought the lady in the bed was me, and crawled in with her – by now, he was feeling amorous.

Hence, the scream in the wee hours of the morning.

Divorce eventually followed – but that’s a story for another time.

On her blog, Behind the White Coat, Victo Dolore recently published a very simple post, the entirety of which was:

When you can look at someone and see more than you just saw.

Which made me think, not only of my first marriage, but also of my current one.

When Cordelia was an infant, my current husband took a job working on a project which would last for approximately one year. The money was very good – so good, in fact, that I was able to take a leave of absence from my own job in order to become a full-time mother to Cordelia.

It was a dream come true – a husband supporting me, while I cared for my child. A clean house. A good, home-cooked meal every night.

But of course, as a young mother, I was a wee bit insecure. Hubby was tired when he came home. I was tired after cleaning and cooking. Evenings were not as romantic as either one of us would have liked

And then I got the call.

“Hello, is this Mrs. [X]? I work with your husband, and I just want you to know that there’s been some funny stuff going on at work.”

Is it possible? Maybe I have let myself go a bit. He is working with beautifully dressed professional women all day. Could it be?

I waited all day, thoughts running amok. He loves me, he loves me not. He’s a man – would he be strong enough to resist?

Have I become fat and ugly?

I watched out the front window of our apartment when I knew it was time for his arrival.   As he approached, I watched the way he walked and saw the look on his face.

No way in hell. It didn’t happen, wouldn’t happen. A man who was cheating would not have such a loving, joyful look when coming back to his family after work.

Once Cordelia was in bed, we had a good laugh. It turned out there had been some kind of dispute with a female co-worker, and she was the vindictive type.

Thirty years later, I still think back to that day – it was the only time I ever doubted my husband’s love, even for a moment.

The image is my photo of a print I bought during that trip to Shenandoah, and it is published with special thanks to the artist, Ruane Manning, who kindly responded to my email and told me that it was “one of my first published prints. I actually painted a series of 6 different animals back in the early 70’s..(painted in Sepia tones)” – Extra special, indeed! Thank you, Mr. Manning, for your permission to use the photo, and I hope this post does justice to its use.