Hubby and I Don’t Sleep Together Anymore 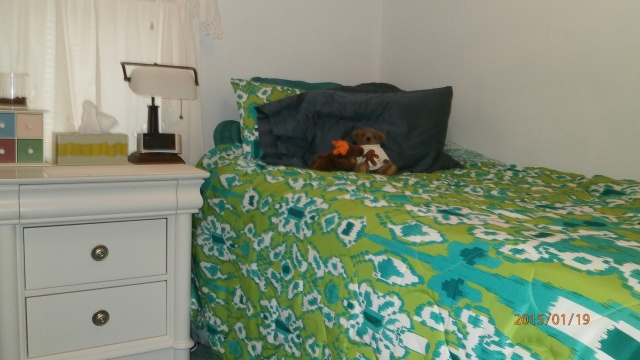 Can you see the teddy bear? Her name is Teddy Rose – more on this in a future post!

And now, some of my male readers are probably scrambling to be the first to get to my house!

Settle down, guys – it’s not the way you think.

I snore.  My husband snores.

I thrash around in my sleep.  He talks in his sleep.

I like the bedroom to be sub-zero temperature so that I can snuggle into a whole pile of sheets, blankets and comforters.  My husband prefers a really warm room so that he can sleep naked with only a light sheet as cover.

You can see how all that could create a certain amount of tension.

Like most married couples, we spent years sleeping in the same bed, despite our differences.  But at some point it became apparent that neither of us was getting any rest (because of the above differences, not because being in the same bed led to other energy-requiring activities – well, at least not all the time).

Finally, we came to a decision to have separate rooms.  No more middle-of-the night exclamations of “Stop snoring!” or “Would you please stop kicking me!” or “Shut the hell up already!”

For a long time, we hid our new sleeping arrangements from various relatives who viewed such separation as a precursor to divorce.  Not that it was any of their business, but those relatives were misguided – having separate bedrooms actually made our marriage stronger, because now that we were both well-rested, we had more energy for [ahem] special moments.

After all, the rooms are only about 3 feet away from each other (the width of the upstairs hallway). It’s not as if we opted for separate houses (which could very well have happened as we became more and more annoyed with each other’s sleeping habits).

And so, after an “activity” filled evening, we can both retire to our respective havens and enjoy the peaceful “post-activity” sleep without having to worry about that sleep being interrupted by snoring, thrashing or sleep-talking.  Being well-rested makes for a very strong marriage.

Images by Cordelia’s Mom (such as it is), and Matt Kemberling, and Anant Nath Sharma, respectively

22 Responses to Hubby and I Don’t Sleep Together Anymore