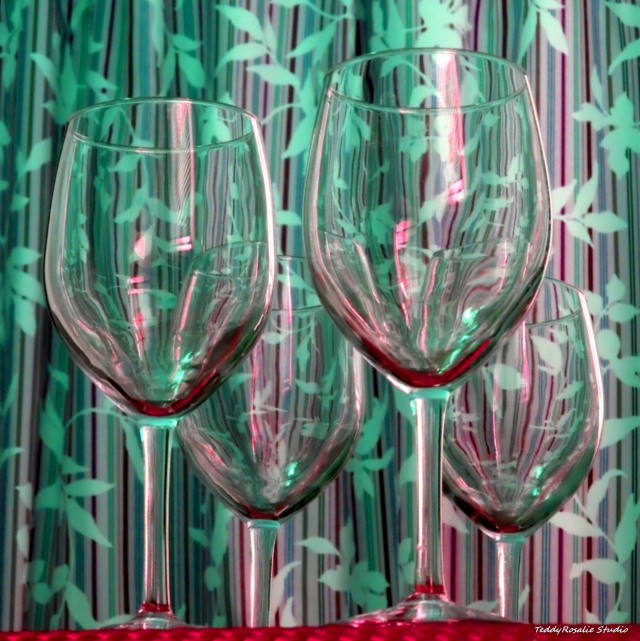 Unless you have short-term memory loss, you’ll realize this photo is very, very similar to the one I published at the end of my last post.  For those of you who do, in fact, have short memories, here’s that photo again:

I had debated strongly while editing the original photo on exactly how to crop it.  Because I wanted to name the photo “Mirrored Glasses“, I decided to include just a smidgen of the brown mirror frame to highlight the title.  I also left a bit of the red table mat, because in my opinion it enhanced the reflection in the glasses.

One of my readers, an experienced photographer, disagreed.  He was of the opinion that if I did just a bit more cropping (remove the brown frames and the red at the bottom), I would have a potentially “award winning” photograph.

Say what?  How can I ignore a compliment like that?

So, I re-cropped the photo to remove the brown, but I ultimately decided I really like the red at the bottom.  The new title is “Holiday Reflections.”

I’m still not sure which one I prefer.  I kind of like the bracketed look of the brown frame in “Mirrored Glasses“, although I admit “Holiday Reflections” is a tighter photo.  Is it potentially “award winning“?  Maybe, maybe not –  but I had a lot of fun with that editing software.

By the way, for those of you who believe a true photographer should be able to take a perfect photo that doesn’t need editing of any kind, allow me to show you what the original photo looked like (this isn’t the actual original photo, but close enough to give you an idea of what I was dealing with): 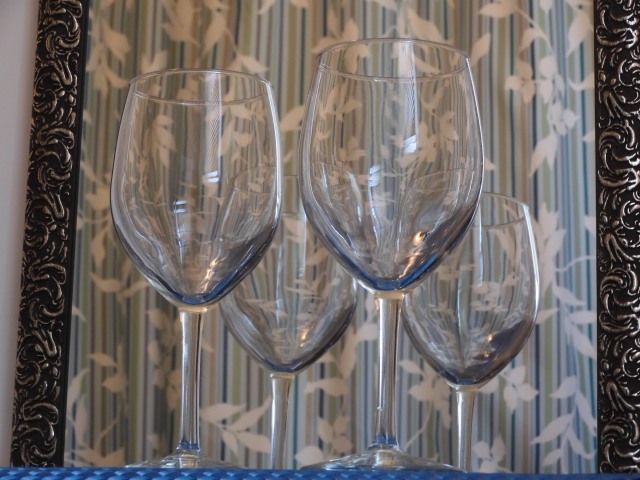 Totally boring.  And crooked.  I played with the hue a lot before I found the best effect for this particular shot.  You would think enhancing the blue would have worked, but it didn’t.  When I hit the green-and-red combination, my heart told me to keep it.

I think I did well.

What do you think – do you prefer “Mirrored Glasses” or “Holiday Reflections“?  Or do you think I should have just stuck with the original blue-and-white?  Leave a comment and tell me why.  Just try to be kind when you do so …

(Many thanks [again] to the reader who took the time to write that awesome comment.  I value advice from more experienced photographers and writers.  I have so, so much to learn!)