Yes, that’s my beautiful 2017 Ford Escape being loaded onto that tow truck.  It was probably driveable, but the police called a tow truck anyway.  I’ll get to that story in a little bit.

It started off as a nice day, despite the wasps:

Yes, that’s wasp’s nest under the eve of my house.  We’ll knock that down in time.  And no, it’s not as big as it looks in the photo – the Nikon has a really great zoom lens.  But I did realize that to take a really good close-up photo, I need a tripod.  Despite balancing the camera on the fence, it was very hard to get a clear picture.

So, being as it was my day off, I added “buy tripod” to my to-do list.

First on that list was to check out the newest little park I found:  Lehigh Memorial Trail in Williamsville, New York.  I never knew that park existed until I saw a reference to it online.  Originally, it was the Williamsville Train Depot: 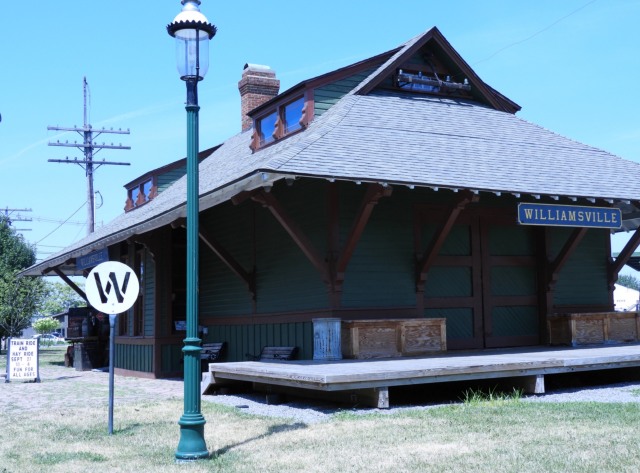 The tracks were paved over to make a nice little pathway: 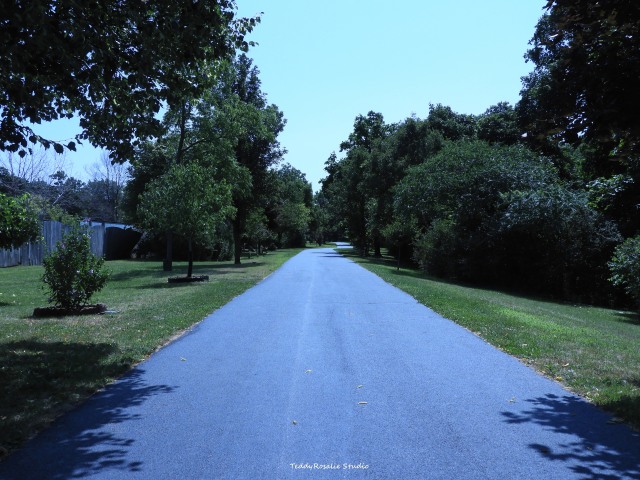 It’s a very short, very easy stroll from one end to the other, and dog-friendly.  They even have a pole with doggie-do pickup bags in case you forgot to bring your own.  I didn’t see any dogs, but there were lots of people strolling through, along with a couple of bicyclists.  And lots of benches for people like me, who need to stop and rest often.

I walked as far as I could, then turned back, and immediately saw a family of deer in the trees between the path and the houses outside the park.  Who would have thought there’d be deer smack in the middle of the Village of Williamsville?  I tried to get a decent photo, but the trees were too thick and the deer too skittish.

Heading back towards the park entrance, I exchanged greetings with a very nice young man.  He saw my camera, and I mentioned the family of deer.  He seemed eager to see them, too, but before heading off told me he had just passed a deer standing “right out in the open by that bench over there.”

Of course, by the time I got to that bench, she was no longer in the open, so I entered the trees between the path and the houses.  And there she was!

Isn’t she pretty?  She just stood there, posing, as if people photographing her were a normal everyday thing.  Well, maybe it is.  She let me get within a few feet of her and seemed pleased when I told her what a good girl she was (after I took the photos, of course – didn’t want to spook her).

My day was now complete.  I finally got my deer picture.

Leaving the park, I started to turn left to head home, then remembered my to-do list:  “buy tripod.”  So, I turned right to head towards Best Buy.  Union Road runs to North Forest, which then meets Sheridan Drive.   A block before Sheridan Drive, there was an accident on the left, consisting of one car, a bunch of people near the car, one pedestrian standing several feet away speaking to the police – and at least four police cars.  Wow, wonder what happened there?

The light at  Sheridan/North Forest turned red, and I stopped well behind the solid white stop line.  As I sat fully stopped, I gazed in my side mirror at the aforesaid accident and pondered whether I should go back with my camera and take photos.  Naw, the cops probably wouldn’t like that.

No sooner had I finished that thought than WHOOMP – my car was hit from behind and pushed 10-15 feet across the crosswalk and nearly into busy Sheridan Drive.  If I had a smaller car, I would not be writing this post now.

Had I turned left instead of right out of Lehigh park, I would have avoided that accident completely.

Would have, could have, should have.  Fate always keeps us guessing.

Long story shorter – after 8 hours in the emergency room, which included x-rays and an ultrasound, I’m ok.  Just bruised and sore.  And driving a rental car, which will be paid for by the other driver as he was ticketed for excessive speed and failure to stop.  (It helped that a witness came forward who had seen the whole thing,  bless her little heart.)

On a final note – the SUV that hit me was a RAV-4.  This is the second time I have been hit by a RAV-4 while minding my own business.

When I went to pick up the rental car, they offered me a Toyota Corolla, but then discovered it had a low tire, so for the same price they upgraded me.

Fate definitely has a sense of humor.

Hope your weekend is going better than mine.  Stay safe, everyone.