Reblogging – because, hey: Puppy Cody! The poor dog doesn’t know it, but she’s about to go through that whole household reconstruction business all over again. More on that soon. 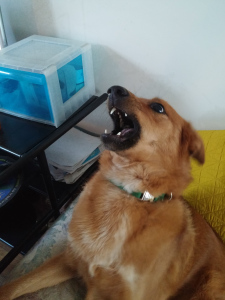 It was the night of the big Paul McCartney concert here in Buffalo, NY.

Hubby had been disappointed that he was unable to attend the Ringo Starr concert at Art Park the year before, and was over the moon when Cordelia was able to score tickets to the Paul McCartney concert.

I have never been a Beatles fan (please don’t hate me), so I opted to have a quiet Thursday evening at home with Cody. I did put the television on (and I never watch TV) because a local station was periodically broadcasting live from the concert venue.  I had told Cordelia and her Dad to wave, but if they did, I never saw it –  you’d think with only 17,000+ fans in attendance, that would have been a slam-dunk, but then my old eyes are not so good at picking out moving pin pricks, especially those in the nosebleed seats.