On November 8, 2016, the People of the United States of America will be electing their next President.  Will they vote for the dictatorial old lunatic or the disreputable old biddy?  Or will they use that ever important write-in vote?  It will be an exciting day for sure!

In some parts of the world, it’s already November 8, and there are equally important events to celebrate.  I’m honored to welcome Vicky Vladic of the blog  vsomethingspeaks as today’s guest poster.  Is it mere coincidence that the U.S. Presidential Election is on the same day as the birth of Bram Stoker, the author of Dracula?  I think not.

To all my U.S. readers – don’t forget to vote on November 8, and be sure to write-in Cordelia’s Mom a/k/a CookieCakes for President.

I am Cordelia’s Mom, and I approve of this post.

November 8 is a very important day to me. It’s the birthday of Irish author Bram Stoker. Every year I celebrate his birthday in November and his death day on April 20. Bram Stoker has been a huge influence on my life. His character Dracula has been a driving force throughout my life. I don’t know where I would be or what career I would have chosen if I hadn’t met Dracula at a very young age!

I was a child when I first snuck into our lounge room while my older brother was watching a Hammer Horror movie. When I saw Christopher Lee as Dracula, I was hooked. His charismatic portrayal of the vampire Count inspired me to study vampires. When people asked me what I wanted to be when I grew up I had one answer – a vampirologist! 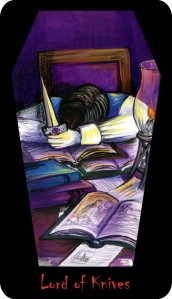 During my turbulent teens, I left school and home early and embarked on a life filled with punk rock music and lots of alcohol. But the shadow of the vampire was always with me. My favourite band was The Damned. I loved their music, but I particularly loved their vampiric lead singer. The former grave digger even changed his last name to Vanian – a play on Transylvanian. I also stocked my book shelves with vampire books and watched everything I could with vampires in it. After years of living like this, I did the one thing I never thought I would – I went back to school.

Inspired by a horror film course being offered at a local university, I went back and finished high school and then applied to university. I was so shocked and so happy when they accepted me. The book report I had to write was on Anne Rice’s Interview With The Vampire 🙂 They knew what they were getting! But vampires weren’t the only things I discovered at university. Somewhere on my academic journey, I started studying tarot. I also joined a witches coven and eventually became a Wiccan priestess.

I loved combining my esoteric pursuits with my academic ones. I did my honours thesis on Bram Stoker’s novels Dracula and The Lair of the White Worm. I predominately focussed on hermaphroditic imagery. I fully expected to do my PhD on cinematic vampires but the faculty thought it would be hilarious to have a real witch do a thesis on cinematic witches. I thought it would be funny too. I laughed for the first few years – but after eight years, I wasn’t laughing anymore. In fact, I was exhausted! My dreams of becoming a vampirologist were slowing fading as thoughts of an academic career took hold. The money would be good and I loved university – didn’t I?

As my thesis slowly ground to a successful end, I started having dreams about vampires. An elegant, masculine white hand with long, tapered fingernails and a frilled sleeve would dip a quill into an ink pot and write. He wrote many things, but mainly he invited me to come home. My imaginary vampires missed me and they wanted me back. What could I do? The only thing I could do. I graduated, then left the world of universities and academia behind. 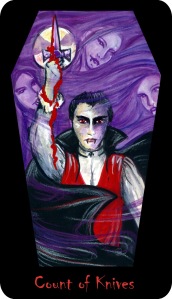 Rekindling my childhood desire to be a vampirologist, I went to work on something I had wanted to create ever since I first touched a tarot deck. With the help of artist Anna Gerraty, The Dracula Tarot was born. The book and deck interpret Bram Stoker’s novel through the medium of tarot. There are many vampire tarot decks out there, but only one Dracula Tarot! While I consider myself a vampirologist, I’ll have to get a few a more vampire books under my belt – and I certainly have many ideas.

Sometimes I wonder what would have happened if I hadn’t listened to my vampire muse. While I have no regrets, I also have very little money. That is the one downside of pursuing a freelance writing career. The chances of being financially secure are very slim. But it was Bram Stoker’s creation which inspired me, and he didn’t live long enough to discover how important his novel Dracula would be. While I don’t expect to create anything as ground-breaking as Dracula, I can always dream 🙂

I’m currently working on a cupcake cookbook with Anne Belov – creator of The Panda Chronicles, I’m also finishing an esoteric cookbook. Next year I’ll be starting work on my follow up to the Dracula Tarot – and yes it will be about vampires!

Images by Vicky Vladic (get your copy of The Dracula Tarot now! – click here for the book, and here for the tarot deck)

7 Responses to THE WRITE STUFF (Guest Post by Vicky Vladic)