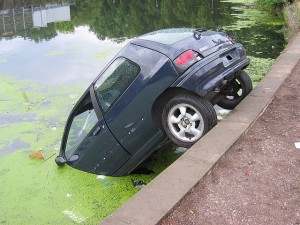 It was bad enough when I accidentally hit PUBLISH instead of UPDATE for last month’s post, Speak No Evil / Hear No Evil / See No Evil.  I immediately searched frantically for a way to un-publish it, but once a post is out there, it can’t be recalled (thanks a lot, WordPress).  So then I was reduced to feverishly adding tags, doing quick edits, etc., in hopes that no one would see it before it had been “professionalized.”

I wasn’t quick enough.  Within just a few minutes, I had my first comment on that post.  I suppose I should view that as a good sign – my posts are just so enticing that people must read them immediately.  (Or maybe Doobster was just bored and surfing the reader at the exact time I made my boo-boo.)

At any rate, since I now was one post short for my July schedule, I began scrounging around for a new topic.

The best topic I could think up on short notice was how I could maybe help newer bloggers realize that some mistakes are inevitable, whether it be publishing a post at the wrong time, publishing a post that has typos, accidentally using an incorrect link or reference, etc.

We are all human.  Most of us bloggers work full-time jobs, sometimes two or three, and have very busy lives outside the blogosphere.  When editing a post at midnight the day before its scheduled publication, it is just so easy to overlook a word or phrase, or to accidentally click on the wrong button.

Early on in my blogging career, I had the bright idea of purging my unused photos from the WordPress Media Library.  I systematically went through the list and deleted any photo that was not “attached” to a post.  Imagine my utter terror when I then went onto my blog page and discovered that I had deleted my header!

At first, I thought it was just a glitch in the system that gave me that ugly red flowery thing instead of the wonderful header created just for me.  I waited a bit for the glitch to resolve itself and tried again – still there.  I went onto a different computer in case the glitch was in my computer – the same red header appeared.  Then it hit me that I had made a boo-boo to end all blogging boo-boos.  I had deleted my unique blogging identifier.

It wasn’t an easy fix.  First I had to find the header image stored somewhere on my own computer (don’t forget – I had to go way back to the beginning of my blogging experience, when I didn’t even know how to store anything).  Once found, I had to re-crop the image and then re-load it to WordPress, and finally I had to re-designate it as the header image.    My more experienced blogger-readers are probably laughing right now, but for someone who had an extremely hard time setting it up the first time, the second time was no less stressful.

And the entire time, I was praying that no one would read my blog during the interim and see that ugly red header!

Fortunately, this was early on in my blogging (as I said), and the one or two followers I had were probably already sleeping that evening.  Apparently, no one noticed the error.

I’ve seen mistakes in other people’s blogs, too.  I hate the grammar police as much as everyone else, but sometimes a typo or mistake is made by a blogger for whom I have the greatest respect.  In that case, I usually email that blogger and let him or her know that he or she might wish to proofread a certain sentence or paragraph in that post.  I would certainly hope that other bloggers would do the same for me so that I would have a chance to discretely correct my mistake.  I would hate for the whole world to think CookieCakes is poorly educated or just plain sloppy.

Anyone else want to share their special blogging horror story?  It would make me feel so much better to know others are as inept at times as I am!