HOW OLD WILL I BE IF I DON’T DO THIS NOW?

Whatever could be better than cuppycakes?

How about my first ever guest poster, and a very special one indeed!  Please welcome artist Anne Belov (a/k/a Bob T. Panda of The Panda Chronicles).

Anne Belov is a wonderful painter and illustrator whose work, both the serious art work and the satirical panda illustrations, brings joy to anyone who views it.  In fact, Anne allowed me to use her painting “Nothing Overlooked” in my February 6, 2014 post.

I can’t wait for Pandamorphosis to be published – just check out the pictures from the book, two of which are being posted here with Anne Belov’s permission. Don’t they make you want your own copy, for yourself, your kids or your grandkids?

Click here to  learn a little about Anne Belov, to view some of her wonderful artwork, and to read about her upcoming book, Pandamorphosis, which will be out later this year (hint, hint): 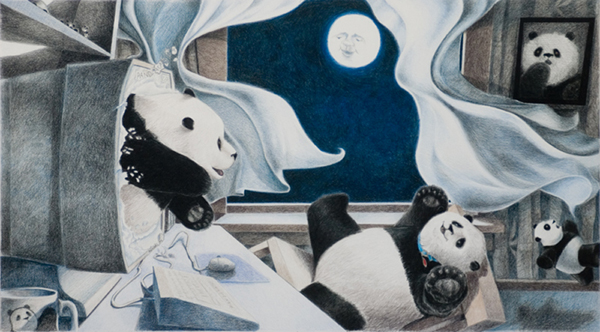 HOW OLD WILL I BE IF I DON’T DO THIS NOW?

There is no getting around it. I am (gasp) on the cusp of turning 60, and I’m finding out that it is not as bad or scary as I thought it might be. I’m also finding out that, contrary to popular belief, you can teach an old dog new tricks, or maybe that’s an old panda. I think there is a secret to not feeling old, and it is this:

We baby boomers are living longer, searching for meaning, and seizing the day until it screams for crying out loud, quit squeezing me so hard. This being the case, it seems to me that the idea of finding your ultimate career in your early 20’s and following that path for the next 60 to 80 years and not doing anything else, ever, just doesn’t seem like …um… a lot of fun.

Just because you love it, it doesn’t mean it isn’t work.

Not even work you love is always going to be fun. I knew from an early age that I wanted to be an artist, and I put my head down, got the bit in my teeth, and said nah-nah-nah I can’t hear you, whenever anyone brought up the practical hardships of living life as a fine artist. Being a self employed artist is harder than you might think and there is no weekly paycheck or overtime pay.

Fine art has supported everything about my life for the last 25 years.

But then the economy crashed in late 2008. You could say I was blindsided by my own success. Because I was doing well, I was not looking for new directions to spread my creative talents. This turned out to be a big mistake, but really, how was I to know? Painting sales are always ebbing and flowing and I convinced myself that one bad year was survivable.

Deciding that I needed something to cheer myself up while I waited out the recession, I started drawing panda cartoons. I won’t go into my pandapiphany here (maybe Cordelia’s Mom will invite me back some other time to tell you about that) but the short version is that I read an article about pandas in China late in 2007, and they started popping out onto paper whenever I picked up a pencil with no destination in mind. In 2009 I started a blog, mostly to see if anyone besides me would laugh at my panda-toons, and so, The Panda Chronicles was born.

I admit to having an obsessive personality.

I read dozens of other cartoonists’ works, books on cartoon theory, and books on visual story telling. All of which lead me to thinking about writing and illustrating picture books. One of the first people I met when I moved to Whidbey Island back in 1989, was Deb Lund, a teacher who writes for children. She encouraged me to think about illustrating children’s books, and 20 years later, I went back to her and said, “Deb, I’m ready!”

(I may be obsessive, but I also think a long time about things.) Deb pointed me in the direction of SCBWI (Society of Children’s Book Writers and Illustrators) where I’ve been learning what I needed to know on all aspects of the Kid-Lit book world ever since.

I attended my first regional SCBWI conference in the spring of 2009, and then took a class with Deb later that year. It was in that class that Pandamorphosis had it’s beginning. The road to Pandamorphosis has been long and winding. After taking three years to write/draw it (it is a wordless picture book) I spent another year and a half submitting it and collecting rejections.

Many of the rejections were rather encouraging (if that’s not a complete contradiction) but they were still, in the end, rejections.

I let Pandamorphosis reside in a drawer.

But wait, let’s fast forward to the happy ending! In October of 2013, after attending the Whidbey Island Writers Conference, I decided to put on my big girl panties and find a way to publish Pandamorphosis. Support from my readers and from colleagues in the art world has been gratifying.  The rest will be history.

ADDENDUM:  Recent events around Pandamorphosis have thrown the pandas into a tizzy.  I would tell you the end of the story if I knew it at this time.  Let’s just say, stay tuned for our next exciting chapter.

Anne Belov indulges her obsession for panda satire on The Panda Chronicles, she also writes regularly for Whidbey Life Magazine, an on-line and print journal of arts and culture, and shows her paintings at The Rob Schouten Gallery in Greenbank WA. Her first book for children, Pandamorphosis will be published sometime in 2014 by Leaping Panda Press, Anne’sown panda-centric publishing venture.  Previously published works include four volumes of the collected cartoons of The Panda Chronicles. Her main regret in life is that there is no MacArthur Foundation Grant in the field of Panda Satire.

11 Responses to HOW OLD WILL I BE IF I DON’T DO THIS NOW?