It’s that time of year again – the annual office dinner.

Fortunately, my office consists of only four people, who all get along well – and all the spouses are also great people – so the annual holiday dinner is a fun time.  Again, this year we went to 100 Acres at the Hotel Henry on Forest Avenue in Buffalo, New York.

Unfortunately, not one of the photos I took during dinner turned out well.  I tried to circulate a bit and discretely take photos of everyone at the table, but people kept moving.  Darn them.  So every single “people” photo had at least one person with a blurred face or hands (people will talk with their hands, won’t they?).  So much for any thoughts I may or may not have had about becoming a wedding or events photographer!

And of course, once the food arrived, I totally forgot I even had a camera.

Hubby specifically asked me to take a photo of his yummy pumpkin-cookie-sandwich (and those are homemade marshmallows!).

Lest I forget, allow me to describe the dinner food.  We started with appetizers – humus, warm marinated olives, carrot salad, a ham plate, a bread plate – and crispy potatoes!  I love crispy potatoes!  Which is good, because the only other appetizer I could actually eat was some of the ham.  Each appetizer was artistically presented, and the wait staff was awesome.  Our waitress was knowledgeable about all the dishes and adept at describing them before we ordered – and her manner was friendly and down-to-earth, with just enough humor to make everyone comfortable.  I appreciated that; too many upscale restaurants have snooty staff, which always makes me feel out of place.

Dinner choices were somewhat limited for someone with my dietary restrictions, but the special of the day was halibut with a lobster/celery root sauce.  The fish was done to perfection, and it was a good sized portion.  I was able to pick the chunks of lobster (fresh lobster!) from the sauce and scrape the celery root aside.

Hubby ordered the Erbe Verde chicken breast, which came with roasted carrots- also perfectly cooked and artistically presented.  Several others in the group had the cheeseburger – those burgers were HUGE!  They were presented to resemble a giant mushroom on the plate – I have no idea how everyone got their mouths around those sandwiches.  The burgers came with crispy potatoes.

(A bit of info to those who haven’t been to 100 Acres:  The entrees come with only the items actually noted on the menu – no salad, no soup, no bread.  My fish entree, although beautiful and tasty, was only the fish with sauce, and I was glad for the crispy potatoes appetizer.)

After dinner, we walked around a wee bit, same as last year, and I took the opportunity for some interior photos: 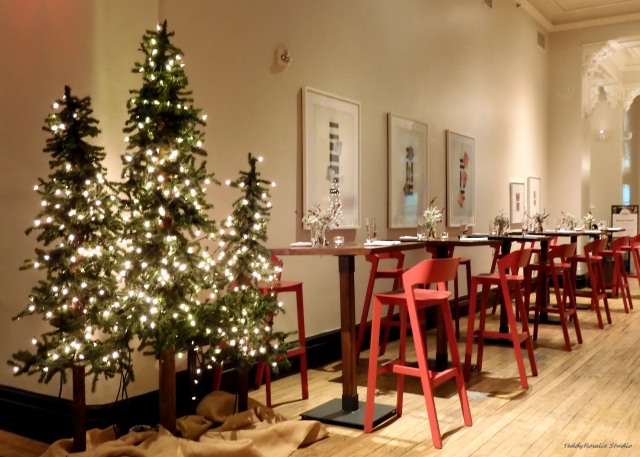 (We had a regular table, with ordinary chairs, thank heavens – I would have made a fool of myself climbing onto one of those high orange chairs.) 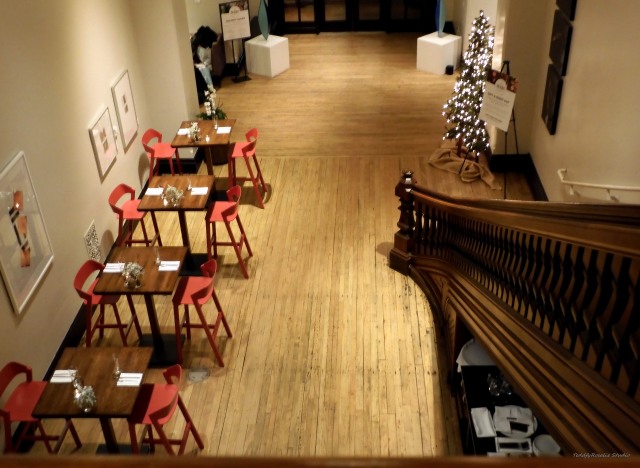 View from the Balcony – 100 Acres at the Hotel Henry

Those of you who have been following me for awhile may remember a similar photo from last year.  I just love that hallway and couldn’t resisting taking another picture.  Doesn’t it make you imagine a pair of twin girls holding hands and standing at the far end?

The photo at the head of this post was taken through a second-floor window onto an outdoor patio (which, of course, was closed for the season).  The view is of part of the Buffalo State College campus.  (I apologize for the blurriness, but it was night time and it was through a window from a very bright hallway behind me.  I’m sticking with that story.)

Thus ended another great evening.  My firm’s holiday get-together is certainly something to look forward to every year.

14 Responses to The Office Dinner