Guess What, Mr. V: My Readers Disagree With You

Anyone who has been following me from the beginning knows the story about that 11th grade English teacher, Mr. V.  If you don’t know it, you can read the story in my About page.

For many, many years, I totally hated that English teacher.  So much, in fact, that on my second guest post on Cordelia’s website, I wanted to add a postscript that said:

Cordelia rejected that .  (I can’t imagine why – but maybe the fact that it was a Christmas post had something to do with it.)

I even had visions of posting Mr. V’s real name and maybe trying to find out where he lives now and posting that!  If I discovered he had died in the interim, maybe I could find his tombstone and post a picture with some kind of wicked comment.  (Yep, Cordelia’s Mom can be a really nasty person if you cross her.)

The more I thought about it, the angrier I became – I could have had a real writing career were it not for that one teacher’s stupid comment.  I wanted to get back at him somehow, and I wanted him to know that I had proved him wrong – I now had READERS who didn’t think my writing was worthless.

So back and forth Cordelia and I went on the draft of that post.  She loved the post itself (who wouldn’t?), but the hatred simply didn’t fit in with the style of her blog.

Maybe I should’ve posted it on:

I wracked my poor pitiful brain to come up with something that would express my anger but not offend Cordelia’s readers.

Finally I came up with:

That certainly covered it, I thought.  But again, surprisingly, Cordelia rejected it.

Well, I really wanted my guest post published because it was a gift to my newly found readers.

I sat back and began thinking (it does happen sometimes.)

I thought back over the many, many years since high school and all the ways that I had found to use my writing abilities.  Beyond the normal work-related material, I had found an outlet once I had children of my own.  After all, who better to write those Santa and Easter Bunny letters than a parent who knows the child best?

“Dear Cordelia:  Thank you for your letter.  I’ll try my best to bring you the puppy you want, but I will have to check with your parents first to be sure they have the ability to take care of it for you.  I have had problems with PETA in the past when I have given a live animal to a child at Christmas time, and then that child’s parents didn’t want it and wouldn’t allow it.  I notice there are lots and lots and lots  of other nice items on your wish list, and I promise to bring you at least one of those. – Love, Santa.”

(No, Cordelia, you haven’t forgotten that one – I never actually wrote it.  But I would have if I had thought of it at the time.)

So, for each Christmas and Easter, each of my children received a very nice, handwritten note from Santa and/or the Easter Bunny.  I even used special pens and papers, and disguised my penmanship so they wouldn’t catch on.  And when Cordelia grew too old to believe, I got her a set of special pens, and she took over the task for her sisters.  Worked out well for all of us.

Anyway, back to the issues with my Christmas post.

My rambling thoughts focused back on Mr. V.

Maybe I was able to write such wonderful stuff now BECAUSE I was so angry with him.  Maybe the need to prove him wrong had become the very catalyst I needed to put my abilities into the public light.

My thoughts took an alarming turn.  Instead of HATRED, I was beginning to feel THANKFUL to that cranky old man.  And at some point, I began to feel COMPASSION.

Maybe the reason he had come down so hard on a starry eyed teenager was because he, himself, had failed as a writer.  Maybe in his own, misguided way, he was trying to save me the pain of pursuing a dream that might ultimately cause me more misery than happiness.

(Or, maybe he really was just a cranky old fart who enjoyed dashing a child’s dreams.  We’ll never really know, will we?)

After several hours of this deep thinking (and several glasses of wine), I made the final edit to my postscript on the Christmas post: 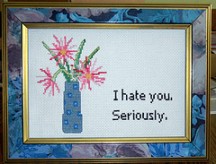 “Oh, and a note to Mr. V: While I would not be unhappy if you got coal in your stocking this year, I do want to wish you a happy holiday. Thanks to Cordelia’s readers [*gasp* MY readers?] I have finally forgiven you.”

Sometimes, a parent learns from the child.  Cordelia (and her readers) taught me forgiveness.

As always, I love to hear from my readers.  You may either comment on this post, or email me at:  cordeliasmom2012@yahoo.com

2 Responses to Guess What, Mr. V: My Readers Disagree With You