Praise for Ditch Diggers and Plumbers

How many bodies do you think could be buried in this “grave” if placed end to end?

All we need is a tombstone or two, right?  Too bad the digging hadn’t been done prior  to Halloween.

Yes, the sewer work has been completed.  While the outside of my house is looking pretty rough right now:

Gotta love that bush that had to be cut in half. Not.

The basement is looking pretty cool: 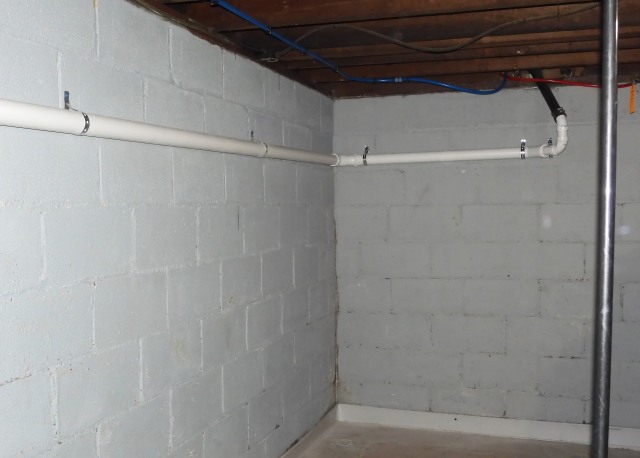 Since there would be no water nor usable toilets during the sewer work, Puppy Cody and I stayed at our local Homewood Suites by Hilton hotel.  I was impressed by the size of the “room” – it was actually a small apartment with a full sized kitchen and separate bedroom.  It even had a fireplace! (although I never turned that on, so I can only assume it worked).

There were no guest rooms on either side of us nor across the hall, so the hotel was very quiet.  The exit door was a short walk down the hallway, so it was easy getting Cody in and out.  Outside the hotel was plenty of green space, and there were strategically placed bins specifically designated for disposal of pet waste.  Again, I was impressed.

Despite being quite comfortable in our new temporary home, Cody spent a good portion of her time waiting for Dad to come back to take her for walkies:

Eventually, she did settle down:

Meanwhile, hubby hung out at the house because, even though we’ve used Roy’s Plumbing for at least 30 years and they’ve replaced every pipe in the two houses we’ve owned, he wanted to “supervise” the work.  I’m sure the idea of watching a backhoe digging and workmen climbing in and out of a huge ditch to lay pipe factored into his decision not to spend the time with us at the hotel.  He sent me photos of the work in progress so I wouldn’t miss out: 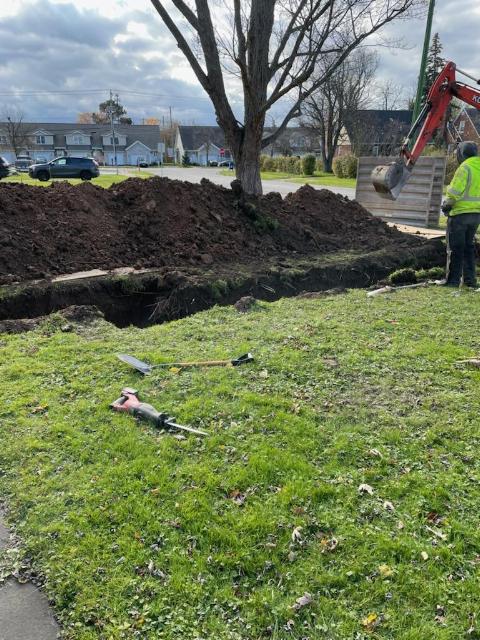 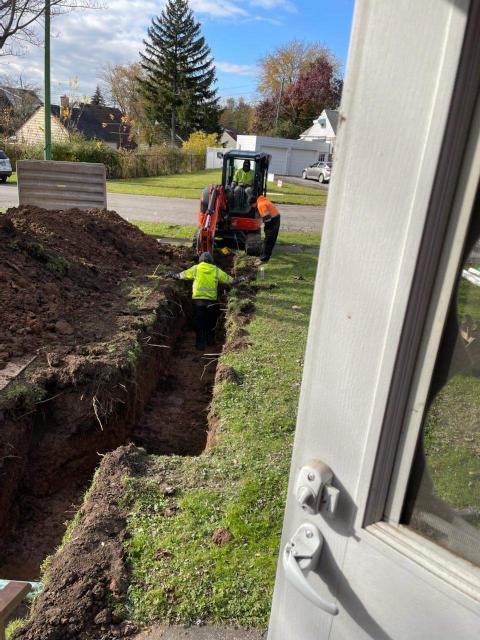 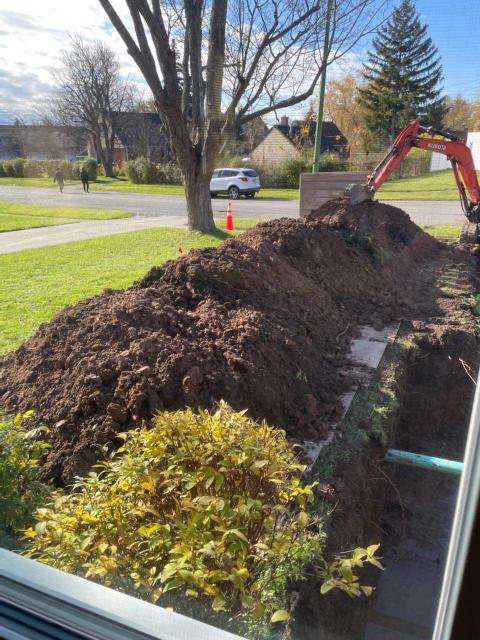 That’s the utility tub from the basement. It had to be replaced along with the sewer lines.

Glad I wasn’t there.

When I was growing up, many adults would encourage white collar careers, claiming that if one weren’t properly educated one could “wind up being a ditch digger.”  I gotta tell you, the guys from Roy’s Plumbing worked their asses off on a fairly cold, damp November day, and as far as I’m concerned they should be (and probably are) paid more than most people working white-collar, cubicle based clerical jobs – and I’m sure that most of the crew were college educated and/or had extensive training.  Plumbing ain’t easy.  Hubby tells me that the crews working both inside the house replacing the pipes and outside the house digging the ditch, connecting pipes and tying into the town sewer line were professional, efficient and courteous.  They got the entire job done in about 7 hours – an incredible feat in my book.

The whole process, from hotel move-in to sewer replacement to hotel move-out took only about 24 hours, but it seemed so much longer.  We were all a little disoriented by the time it was all over.

But at least now when I flush a toilet I don’t hear that horrendous groaning sound which made me think the entire sewer line was about to explode, that horrible sewage smell has dissipated, and now all the interior pipes are above ground so if one ever breaks again, there will be easy access.  I understand that many new homes are being built this way to avoid ground settling and crushing of pipes.

Was it horrendously expensive?  You betcha.  But worth every penny of it.

I can only hope my fingers hold out well enough to complete all those crochet orders coming in so that I can replenish some of my savings account.  My hats have thankfully become quite popular, especially since I’ve added a line of faux spirit hats (colors as close to official team colors as I can get them, and easy to make regardless of what teams my customers support). 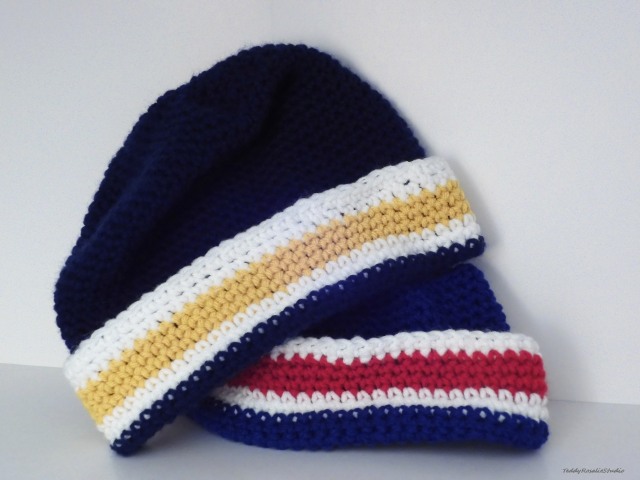 We once again are back to more-or-less normal in Cordelia’s Mom’s world.

How are things by you?

10 Responses to Praise for Ditch Diggers and Plumbers