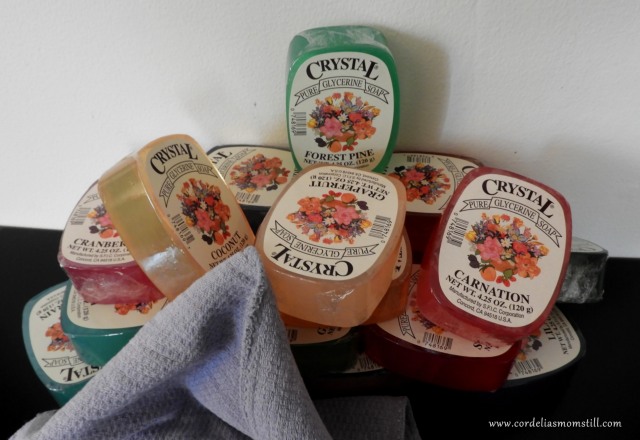 I don’t know about anyone else, but I am glad the holidays are over.

Not that it wasn’t a great time for everyone, but it’s nice to get back to the daily humdrum.  It’s comforting to know I don’t have to go anywhere (except to work), buy anything (except for groceries), or do much of anything in my off-time (except for reading, playing videogames – and of course, playing with Puppy Cody).

First off, one of my daughters discovered a manufacturer who offers scented glycerine soaps at a reasonable cost, and for Christmas she gave me a whole case of assorted fragrances.  I love my glycerine soap but had stopped buying it when I could no longer find it locally at a price I could afford.  The last time I looked, our local Wegmans was selling one bar for nearly $8.  I had switched to Yardley, at $2 a bar, but then Wegmans stopped selling the lemon scent (my favorite) – and I’m really, really tired of lavender.  24 bars of assorted glycerines has gone a long way to starting off my New Year right.

On another note, it turns out my bank had, in fact, miscalculated my real estate tax burden and thus miscalculated my monthly mortgage payment.  That has been now been corrected, and my payment will be going back down to what it should have been all along.  Yay.

Finally, I made the last payment on all that furniture I bought a couple of years ago.  One less financial obligation each month.  Yay.

My boss gave out year-end bonuses, which I wasn’t expecting.  At the same time, he indicated that I will be getting a salary increase on my work anniversary in February!  It’s almost too much to absorb after so many years of working for skinflints who believed neither in raises nor bonuses.

I still have 3 vacation days that I must use up before my work anniversary.  I’ve decided to take 3 consecutive Thursdays in January, to go along with my normal Fridays off, thereby giving me extra long weekends for three entire weeks.  As it turns out, my office is closed on Martin Luther King Day, and so I will have a very nice 5-day weekend, followed by a 2-day work week, followed by a 4-day weekend.  I can live with that.

I’m becoming very spoiled very quickly.  February will be a bit of a rude awakening, but I’ll take what I can get while I can get it.

Which, apparently won’t include winning the lottery.  I had received a scratch-off at Christmas, which won $2.  So I turned it in on a new ticket – and because it was New Year’s Eve and I felt lucky, I bought 5 more of the same.  Those gave me $8 in winnings, so I turned around and got 4 more tickets, on which I won $6.  Turning that into 3 more new tickets, got me exactly nothing.  Each ticket cost $2, so had I stopped with the first one (a gift), I would have been ahead.  Instead my optimism cost me $10, but at least it was a fun run while it lasted.  These days it’s hard to find any fun in anything costing only $10.

I suppose I could have bought an $8 bar of glycerine soap at Wegmans and been ahead $2, but as much as I love my glycerine soap, once it’s gone it’s gone, unlike a lottery scratch-off which, theoretically, could turn into a much larger win.

But apparently not for me.

I did win the lottery, however, with my family.  My loved ones are wonderful people who actually listen occasionally when I say I want something. In addition to my glycerine soaps, they gave me wine, chocolates, and gift cards to my favorite restaurants and stores – and even though he was feeling a bit under the weather, Hubby took one of his New Year’s holiday days to paint the downstairs bedroom. 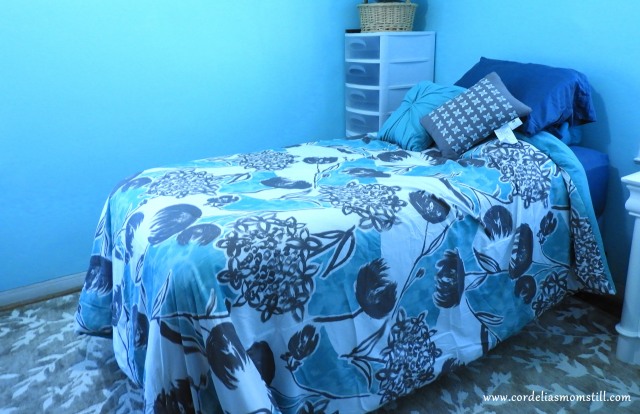 Look great, doesn’t it? Yes, it really is blue, but the white furniture and white trim (and gray/white rug) tones the blue down.  I just couldn’t get a really good photo as I still need to hang curtains and pictures, and didn’t want to show you the unfinished aspects of the room.

Two rooms done!  Only five more rooms and two hallways to go.  We’re moving right along.  I’ve decided I no longer want a yellow kitchen, so now I can enjoy looking at paint samples again.  Something to look forward to.

Hope your 2019 has also started off with a bang, and that it’s a good one for all of us.