There have been a number of news stories recently about people finding poisonous spiders and other critters in their imported fresh fruit.

Get with the program, people –  all you need to do is STOP EATING HEALTHY FOOD!

I’ve never found a spider in a bag of potato chips or a box of donuts.  My vanilla ice cream is always pure.

I admit, I did buy a pumpkin cake which was recalled by the store due to the possibility of the dough containing microscopic pieces of metal – but there weren’t any critters in it.

Unless you really enjoy opening up a bag of fruit and then running in terror, just stop buying it. 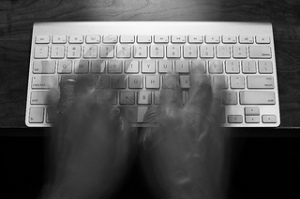 I believe I can hear those computer keyboards screaming as a large percentage of my readers rush to tell me maybe I wouldn’t be such a fat slob if I took a chance on those spiders instead of the equally dangerous trans-fats.

In my own defense, let me tell you this:  I have severe ulcerative colitis and cannot eat fresh fruit, so I tend to be biased against it.

And while I do, in fact, eat potato chips or donuts occasionally, they are not the major portion of my diet. My diet pretty much consists of sliced turkey, plain skinless baked chicken, fish, pasta, plain potatoes, rice, canned veggies, and other soft foods.

My extended battle with ulcerative colitis will be the subject of a future post, once I gain the courage to write it.

There was a time, however, before I got diagnosed with ulcerative colitis, when I couldn’t eat ANYTHING solid.  I had a condition known as gastric volvulus  (my stomach had been pushed up into my chest cavity after a car accident, and was twisted and upside down, thereby preventing the passage of solid food, and causing intense physical pain, vomiting, etc.).  The condition is the same one that dogs sometimes suffer, but then it’s called bloat.  I had a dog that died from it.

Prior to scheduled surgery several weeks after diagnosis, I could only eat creamy soups, puddings and gels, and drink liquids.

Sounds horrendous, doesn’t it?  But it actually was kinda fun for awhile.  Imagine going to a restaurant with family or friends, and while they order the usual healthy dinner, all you can order is:  CHOCOLATE CREAM PIE or an ICE CREAM SUNDAY or a MILKSHAKE.  I actually lost something like 60 lbs. on that enforced diet.

Of course, now I can’t even eat the chocolate pie because it irritates my colitis, but I can manage any non-chocolate cream pie (thank heavens).

I’ve been following a number of blogs by people who are suffering various health conditions and are willing to share their experiences with the entire world.  I applaud their openness.  On occasion, I’ve commented on their posts, sometimes referring vaguely to my own “health condition,” but I have yet to find the words to relay my own story.  It’s gross, and it’s scary, and I’m not sure it would fit into the style of this blog.

What do you think, folks?  Are you willing to forego my usual side-splittingly funny posts for one nearly as serious as death itself?  I know many of you also suffer from ulcerative colitis or Crohn’s, and maybe you’ve had luck with your meds and are in permanent remission.

I almost died from my ulcerative colitis.

Anyone want to hear about it?